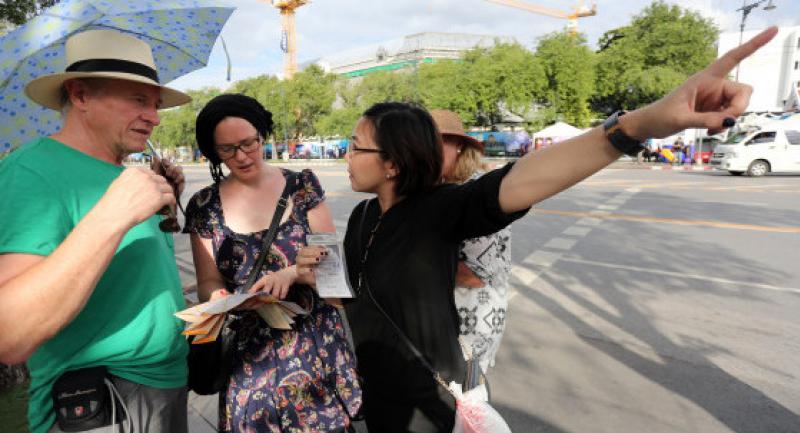 VOLUNTEER interpreters have been brought in to assist tourists after the reopening of the Temple of the Emerald Buddha.

The temple had been off limits to tourists since October 14. Tourists have been allowed to tour the site since November 1.

“Some of them asked me about their right to pay homage before the Royal Urn inside the Throne Hall, making me so proud of having a part in working here.”

He said he and Thai Airway’s TG Volunteer Team had been working there since October 14 in close cooperation with the Tourist Police Division.

“TG Team can facilitate tourists speaking various languages because we have cabin crews who can speak English, French, Chinese, Italian, etc,” he said.

He said the team did its best to respond to the tourists’ needs.

He said the team would be in the area to facilitate tourists and mourners until the royal cremation ceremony ends.

Wasan Pornputtipong, 59, a lecturer at Phanomwan College of Technology in Nakhon Ratchasima province, said he took leave to do volunteer work.

He said the volunteer interpreters would stand at screening points around Sanam Luang and nearby locations to inform tourists.

“This is my first time as a volunteer Chinese interpreter. My duties are informing tourists about how to dress appropriately during the mourning period and guiding them in the direction to the temple as well as telling them [other] information,” he said

He said he would do voluntary work for a week, and then he would be ordained as a monk, dedicating merits to the King.

Techit Tuasakul, 17, a Matthayom 5 student from Wat Bowornniwet School, said he volunteered as the Reserved Officer Training Centre has been recruiting volunteer students to help officers facilitate tourists and mourners.

“I work as an English interpreters to answer questions from tourists and also check how they dress. If someone does not dress properly, I would tell them where they can change their clothes,” he said, adding that there had been no problems because tourists were cooperating.

“I decided to be a volunteer interpreter because I want to apply things I learnt from school such as English skills to help others,” he said, adding that the work will improve his skills.

He said he did his duty until 6pm each day, and then other volunteers took over.

A freelance guide, Sorada Toipan, 48, said she has been working as a volunteer for six days.

She said all volunteers had to register at the Volunteer For Dad Cooperation Centre at Thammasat University first.

“It is quite challenging that I was assigned to work at the screening point where all tourists flow in all day, and have to be screened here before entering Na Phra Lan Road,” she said.

She said her duties involved asking tourists to show their passports and open their bags before passing the screening gate as well as informing them to wear proper clothes.

“I have seen officers work very hard during this time and I wanted to lighten their work, so I decided to work as a volunteer interpreter.

“I realised that being a giver truly makes me happy,” she said, adding that she will work as a volunteer for as long as possible.

She said she would have regretted it the rest of her life if she had missed this chance to do something for the late King.