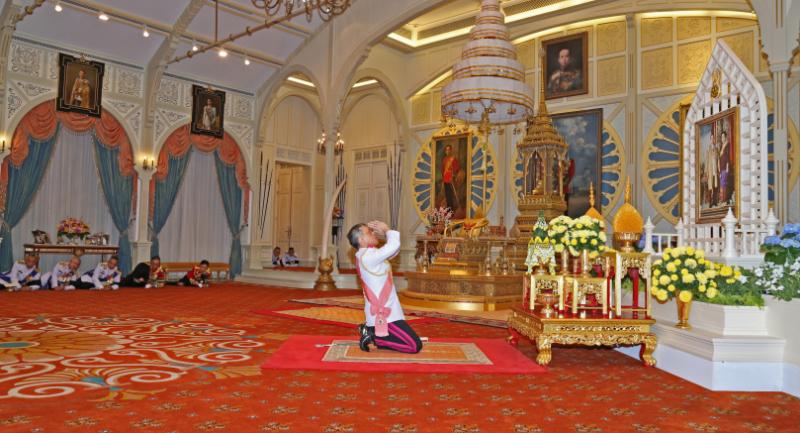 His Majesty King Maha Vajiralongkorn pays respects to his parents, the late HM King Rama IX and HM Queen Sirikit, after he accepted the invitation to ascend the Throne.// Royal Household Bureau

HIS MAJESTY King Maha Vajiralongkorn Bodindradebayavarangkun was proclaimed yesterday as the 10th King of the Chakri Dynasty after he accepted the invitation made by the president of the National Legislative Assembly (NLA) in accordance with His Majesty King Bhumibol Adulyadej’s will, the Constitution and Palace Law.

“I accept the invitation in order to follow His Majesty King Bhumibol’s will and for the benefit of all Thai people,” HM King Maha Vajiralongkorn said in reply to the invitation during the inauguration yesterday.

At the audience at Ambhorn Sathan Villa in Dusit Palace starting at 7.16pm, Pornpetch asked the Crown Prince to ascend the Throne and become the 10th King of the 234-year-old Chakri dynasty.

“I, Pornpetch, president of the National Legislative Assembly, on behalf of Thai people, ask Your Highness to ascend the Throne following the wish of the late King, the Constitution and the Palace Law,” he said.

The reign of King Rama X actually began on October 13 when His Majesty King Bhumibol passed away in order to preserve the continuity of the dynasty, he said.

After he accepted the invitation, King Maha Vajiralongkorn prostrated to pay respect in front of the portraits of his parents King Rama IX and Her Majesty Queen Sirikit.

The new King then addressed the audience briefly before ending the ceremony. The inauguration was televised nationwide but the King’s conversation with the audience was not broadcast.

According to the law, it is the duty of the NLA president to extend the invitation and announce the proclamation. The other top officials were present at the ceremony as representatives of the sovereign powers in governance, namely the executive, legislative and judicial branches, Deputy Prime Minister Wassanu Krea-gnam said.

Prem, who ended his duty as the Regent pro tempore after the proclamation, praised the new King.

Pornpetch later made a public announcement of the proclamation on television.

In the same television address, Prayut made a statement saying that although people knew they were to be parted from a person they truly loved and respected, which caused suffering, loss and sadness, everyone should turn the crisis into an opportunity and grief into strength.

“Although the late King, who was the strength of the land, is no longer with us physically to protect us, the strength of the land will prevail with the power of faith and confidence in the royal aspiration and approach of His Majesty King Bhumibol Adulyadej,” he said. “His Majesty the new King, the beloved son of the late King, will carry forward his leadership and legacy,” Prayut said.

The proclamation was held yesterday after a merit-making ceremony marking the 50th day since the passing of HM King Bhumibol.

In addition to the ceremony held at the Grand Palace, which was closed to the public yesterday, similar merit-making ceremonies were held at government offices across the country.

HM King Maha Vajiralongkorn will preside over a merit-making ceremony at the palace today, functioning for the first time as King of Thailand.