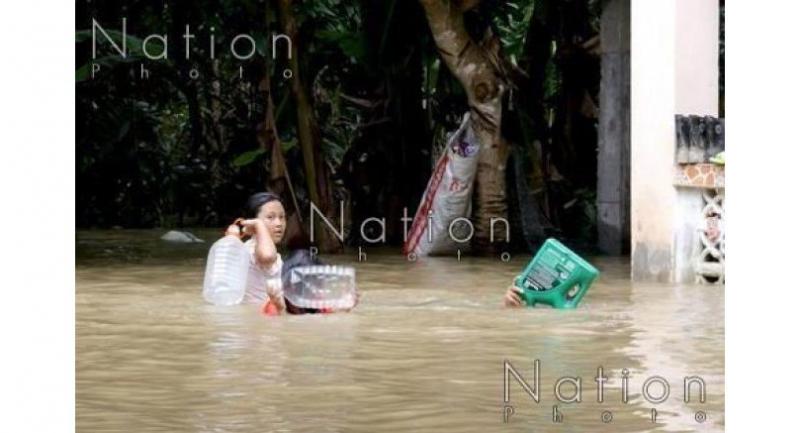 IN THE FACE of weeks-long flooding, many victims in Surat Thani province have chosen to live on rafts so that they can stay close to their flooded houses.

Although rain stopped pouring down in the Sap Tawee area of Surat Thani’s Ban Na Doem district yesterday, floodwater was still well over one metre deep.

“We can’t move back into our houses yet, but we at least can stay close by,” a local man said from a raft.

Just like many other villagers, he has decided to hover around his heavily inundated home so he can watch over the property.

“We are closely following news from the Meteorological Department too,” he said.

The weather bureau has forecast that heavy rain will continue in many parts of the South until Wednesday. Authorities have also warned of a landslide risk.

The Public Relations Department has asked for donations of radios, as officials believe these devices can be useful for people living in areas at risk of floods and other natural disasters.

According to the Disaster Prevention and Mitigation Department, floods have already hit more than 1.72 million people in Thailand, causing 83 deaths and leaving many missing.

Twelve provinces were flooded, most of them in the South.

Nipan Kakoh, a resident in Ban Thung Riang in Yala’s Muang district, said floods struck his village on Saturday night. “Now, floodwater is well over one metre deep at some spots,” he said.

Out of her concerns for her people, HM Queen Sirikit has graciously sent relief supplies to flood victims via the Thai Red Cross Society’s secretary general Phan Wannamethee. Phan has delivered 2,000 sets of relief supplies and drinking water to flood victims in Bang Saphan district of Prachuap Khiri Khan province. Bang Saphan district is the hardest-hit area in the province, where 65, 691 people from 21,532 households were affected.

The relief supplies include items for daily use, medicine and other necessities. The queen’s son, HM King Maha Vajiralongkorn, has created four greeting card designs to raise funds for the flood victims.

Meanwhile, HRH Princess Chula-bhorn has appointed the vice president of the Chulabhorn Research Institute, Damrong Ratanapanich, to deliver 3,000 relief supply bags to flood victims in Surat Thani. Nearly 80,000 residents in the province have been affected by floodwaters, including flash floods, and mudslides – the result of heavy rain since the beginning of the month.