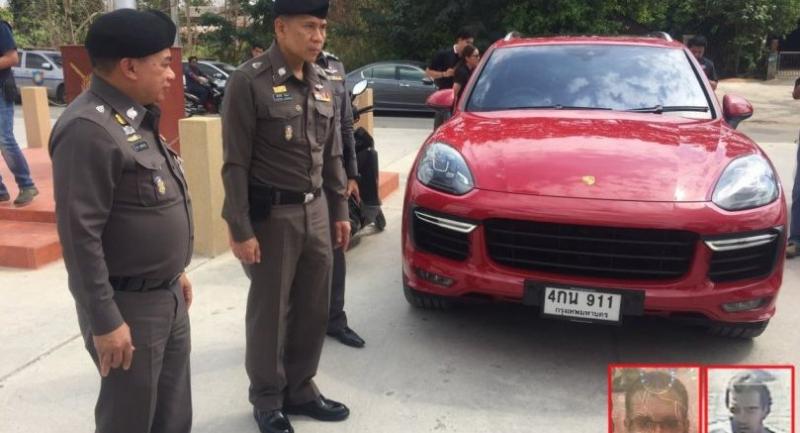 A BRITON and a South African, who are wanted for their alleged roles in the daring murder of British businessman Tony Kenway in Chon Buri on Tuesday, have fled to Cambodia, police said yesterday.

Kenway, 39, was shot dead in broad daylight on Tuesday as he sat in his red Porsche Cayenne GTS in the front parking lot of the Sanit Sports Club in Tambon Pong of Bang Lamung district. The father-of-four had lived in Thailand for seven years and was married to a Thai woman.

The Pattaya provincial court yesterday issued arrest warrants for the alleged shooter, identified by police as Abel Caldeira Bonito, who holds a South African passport, and the operator of the alleged getaway motorcycle, Miles Dicken Turner, who holds a British passport.

Somprasong said the two men are wanted on charges of conspiring to commit premeditated murder, illegal possession of a firearm and ammunition, and carrying the weapon to a public place without sound reason.

A source revealed that a police investigation had found Kenway had a dispute with a foreign business partner who reportedly owed him Bt8 million. After failing to get him to repay the debt, Kenway told police to arrest the man, whose alleged Thailand-based call-centre scam was therefore affected, forcing the man to move the operation to Cambodia, the source said.

It was suspected that the two suspects were involved in the call-centre scam and the foreign business partner arranged the killing, the source added.

The two had registered their names to rent the white motorcycle allegedly used in the killing and they were visible in security-camera footage.

He said that if the duo used fake passports to escape to a third country, Thai police would ask Interpol for help in tracking down the alleged killers. Police have also sent the suspects’ passport information to the South African and British embassies to confirm their identities.

Yesterday, the driver of a chartered van, Lert Laimeunwai, 48, told investigators that the two suspects had rented his van from Trat to Chon Buri on January 19, the same day that the duo entered Thailand via the Trat border checkpoint. They agreed to pay him Bt2,500 a day for six days rental plus Bt500 a day for accommodation.

He said they did not use his vehicle until Tuesday when they called him to pick them up in the van and take them to the Trat border checkpoint.

He told police that while they were in the vehicle, the man identified as Turner shaved off his beard and smoked and they gave him a Bt5,000 tip when they arrived at the border checkpoint. Forensic officers have collected evidence and fingerprints from the van.