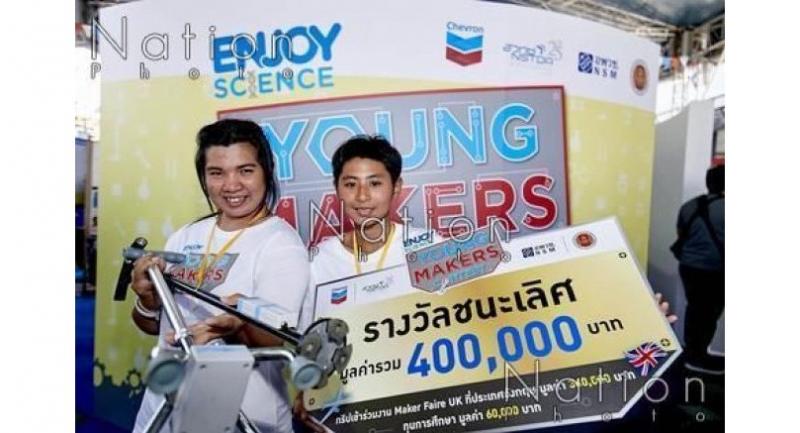 Winners of the Enjoy Science: Young Makers Contest present their outstanding innovations for the elderly and disabled during award ceremony in Bangkok.

THE TALENT of Thai youths to create innovations for the elderly and disabled took centre stage at a unique event in Bangkok to promote Thailand’s culture of invention, one of the primary foundations of the government’s Thailand 4.0 strategy.

During the Bangkok Mini Maker Faire Year 2 in front of The Street Ratchada, the winners of the Enjoy Science: Young Makers Contest, which was part of the Chevron Enjoy Science project, were announced.

Songkhla Polytechnic College’s Team A, which produced a cane equipped with a fall surveillance sensor, took the honours in the vocational education category.

Each winner pocketed Bt400,000 plus a study trip to the Maker Faire United Kingdom.

The Bangkok Mini Maker Faire Year 2, the country’s biggest event of its kind, brought together more than 345 Thai and international people who showcased 122 works and inventions at more than 60 booths.

The event, which attracted more than 5,000 attendees, also offered activities aimed at engaging the younger generations and igniting their interest in the maker culture, such as workshops on 3D printers, drone-making, a Hebocon |robot contest for dummies, and electric parades.

“We hope the event will strengthen the maker culture and the community, enabling the country to prepare for the Thailand 4.0 era, a governmental strategy to transform Thailand into a country driven by technology, creativity and innovation,” Artit said.

NSTDA president Narong Sirilertworakul said that in response to the Thailand 4.0 strategy, the Science and Technology Ministry launched the Startup Thailand policy to equip Thai startups with key skills such as how to add value to products and services, and equip them with an entrepreneurial mindset to initiate both Asean and global market expansion.

“The strength of Thai startups is the key in driving economic growth. And a strong maker culture foundation nurtured by events such as this will contribute to the stable development of the startup sector," he said.

NSM acting director Kannikar Wongthongsiri said: “Supporting a strong maker culture in Thailand will stably enhance its national competitiveness. NSM is additionally promoting the maker culture through the showcase of maker works as well as the Makerspace opening – a co-working space equipped with maker tools and equipment – at our affiliated museums and national science festivals to inspire innovation that can elevate quality of life and democratise opportunities in society for all.’

OVEC Bureau of Research and Development director Mongkolchai Somudorn said to turn Thailand into an innovation-driven economy, the country needed to upgrade the quality of its vocational education, which was important for the manufacturing sector, service sector and entrepreneurship.

“To instil a maker culture among vocational students is a workforce development strategy platform to align with the country’s increasing need for an innovation-led workforce, in place of a manual workforce," Mongkolchai said.

Artit said the Chevron Enjoy Science programme, initiated in 2015, was a five-year initiative designed to promote awareness and interest in the fields of science, technology, engineering, and mathematics (STEM) among students across the general and vocational education systems.

“We believe the enhancement of national competitiveness through innovations can be another drive toward the success of Thailand 4.0 strategy,” Artit said.