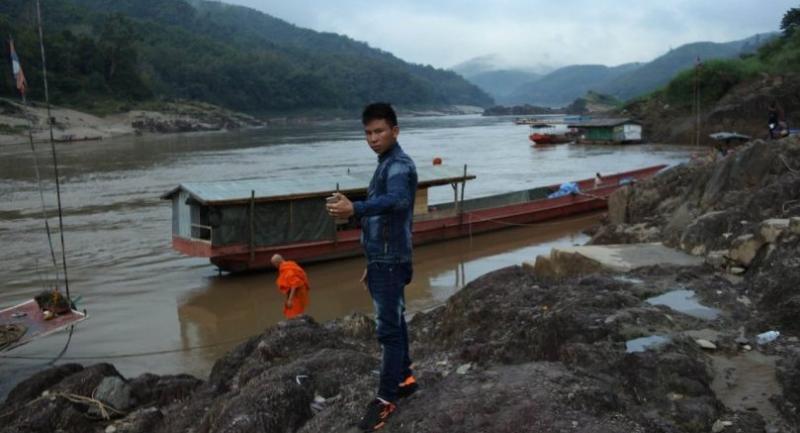 DEPENDING on who you speak to, there are naturally differing perspectives in regard to the future of the Mekong River, as most people living along the river look for a sustainable future through conservation of the existing ecosystem, while governments seek balanced resource usage and benefit-sharing arrived at via diplomacy and negotiation.

The Lower Mekong has been a hotspot for mega-projects and developments initiated by the governments of Mekong River Basin countries and big private investors.

Many of them have already constructed on the mainstream of the river – for instance, the Xayaburi and Don Sahong dams – while many other projects, such as the river’s navigation-channel improvement and Pak Beng Dam, are scheduled to be implemented soon.

As the fate of the river will be changed forever by these projects, people along the banks of the Mekong will be in the front row when it comes to experiencing changes, which they look at with concern.

Jirasak Inthayod, a resident of Chiang Rai’s Chiang Khong district and coordinator of the Hak Chiang Khong (Love Chiang Khong) group, is one of them. “We don’t resist all kinds of development, but how we can develop and conserve the resource that we have is the important thing to consider,” he said.

“We don’t want development that will destroy our resource and only benefit one group of people. The developments in the mainstream of the Mekong may boost the economy, but I would like to ask who will get the most benefit, while the people of the river will have to pay with the loss of their traditional livelihood and ability to be self-sufficient,” he added.

As to the type of sustainable development that suits local people’s preference, and the strong point of the area, he said Chiang Khong had the ability to be a cultural-tourism spot, because the city has a unique culture and beautiful scenery along the river.

“I believe in sustainable development and, through development that is based on the local people and the resource base that we have, we can ensure a sustainable future for the next generations,” he stressed.

Nevertheless, some people view the planned developments on the Mekong as an opportunity for the countries involved to develop, and that their citizens will therefore get the economic benefit, too.

Ngen, a Laotian from Huai Xay in Bokeo province across the river from Chiang Khong, said he would like to see his country developed, so he welcomed development projects for the Mekong.

“Poverty is our main enemy in Laos. It is bitter and cruel for us. The development projects will make the Lao economy prosper and benefit the citizens,” Ngen said with a hopeful smile.

“The river navigation-channel improvement will make goods transportation easier and the dams will generate profit for our country from the sale of electricity. These projects will bring a brighter future for us in Laos,” he added.

On the government side, Nuanlaor Wongpinitwarodom, director of Thailand’s Mekong Management Bureau, emphasised that a sustainable future for the Mekong River Basin could be achieved through benefit-sharing among the countries in the region and a diplomatic approach.

“To ensure a sustainable future, we have to ensure that the development projects will benefit all stakeholders, so the big challenge that awaits us all in the future is how to negotiate benefit-sharing throughout the region. Meanwhile, those who are affected by these projects must be properly compensated by those who get the benefit,” she said.

As to the compensation method, Nuanlaor said the countries of the Mekong River Basin region could set up a central fund to collect money from the beneficiaries of the developments and pay it out as compensation to those affected by the projects.

“We cannot ask others to stop the projects that may affect us, because it will violate their sovereignty, so the best way to better manage the river is the diplomatic approach within the Mekong River Commission [MRC],” she said.

Pham Tuan Phan, chief executive officer of the MRC Secretariat, said his organisation could ensure a sustainable future for the region, as the MRC possessed the necessary “soft power” to make sure that member countries develop the river in a responsible and justifiable manner.

“The MRC is both a scientific technical body and a water diplomacy platform for member countries to negotiate acceptable solutions to common issues. It has the best tool – Procedures for Notification, Prior Consultation and Agreement [PNPCA] – to make sure that the development projects in the mainstream of the Mekong River will be conducted in accordance with the best practice,” he explained.

“No one wants to look bad on the international stage and complying with PNPCA suggestions is a good way [to proceed] and gives them a good reputation, so I’m sure that the development projects on the Mekong will be properly implemented in accordance with our advice,” the chief executive added.

This is the fourth and final article in a series on development along the Mekong River. Also, see story on 10A