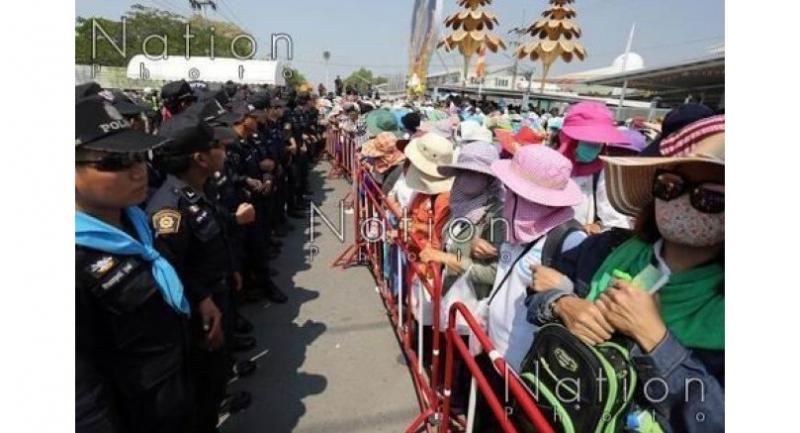 Plan to cut power, water after monks, followers rush in to temple; fugitive monk ‘hiding nearby’

THE DEPARTMENT of Special Investigation (DSI) has asked for police and troop reinforcements and planned to cut off electricity and water to Dhammakaya Temple last night.

A DSI source said reinforcements were needed because a large number of followers had rushed in to obstruct their mission.

Busloads of supporters were also arriving from the provinces.

The source said officers would not raid the temple at night because there was a high risk of the action causing a confrontation and damage. Instead, they would seal off the temple and shut down its power and water supply, as such an action was allowed by under the order issued by the National Council for Peace and Order (NCPO).

For reinforcements, four companies of police – around 600 officers – would be deployed from Samut Prakan and Saraburi at temple’s fifth and sixth gates to control the temple followers, who broke through the police line |yesterday afternoon and tried to obstruct the operation.

The DSI invoked two Article 44 orders from the NCPO to tell 14 monks from Temple to report to the DSI director-general at the Border Patrol Police Region 1 by 6pm, then later yesterday. But the 14 monks had not presented themselves as of press time.

Those summoned include Phra Dhammachayo (now honorary abbot), acting abbot Phra Dattajivo and spokesman Phra Sanitwong Wutthiwangso. Violating the order could cause them to be jailed for up to a year, or face a Bt20,000 fine or both.

Yesterday afternoon, about 1,500 lay followers of the temple ignored an ultimatum by the DSI and broke through a barrier of police and DSI officials to rally inside the temple.

Earlier, the DSI issued an ultimatum for non-residents to leave the compound by 3pm, whether they were monks, novices or lay people. But at about 1.30pm, 1,500 lay followers and monks gathered outside Gate 5, claiming they wanted to pray there.

The DSI issued an order yesterday to facilitate its operation inside the temple after the search over the three previous days failed to locate the fugitive ex-abbot, Phra Dhammachayo.

DSI director-general Pol Colonel Paisit Wongmuang said non-resident monks and lay people had to leave the temple by 3pm yesterday or they would be considered as having defied an NCPO order and be liable to up to one year in jail and/or a fine of up to Bt20,000.

According to the order, monks, followers and other people who do not reside in Wat Dhammakaya or its foundation had to leave the area by 3pm, as declared under Article 44 of the interim charter.

After 3pm, monks, followers and people who reside in the temple were told to report to authorities to check their ID cards for registration. Last week the NCPO declared the temple’s compound an area under control and subject to a search for Dhammahayo, who is wanted for alleged forest encroachment, money laundering and receiving stolen assets in connection with meditation centres in several provinces and the multibillion-baht embezzlement case involving the Klongchan Credit Union Cooperative.

Phra Sanitwong Wutthiwaso, the temple’s communication chief, called on the junta to cancel the order to seal off the temple. The temple spokesman said monks inside the temple would have to leave for a Pali language exam tomorrow and they were afraid they would be blocked from returning.

He said followers who had sent their children to enter the monkhood at the temple wanted to visit them but were prohibited from doing so because of the order.

He said monks, novices and lay followers in the temple were enduring a hardship so the temple wanted the NCPO chief to rescind the order to allow them to enter and leave freely.

Surachai Trongngam, from EnLaw Foundation, expressed concern over the use of Article 44, saying Prayut’s order was excessive and lacked checks and balances – similar to an emergency decree. When authorities carried out an operation under such an order, they were immune to criminal lawsuits.