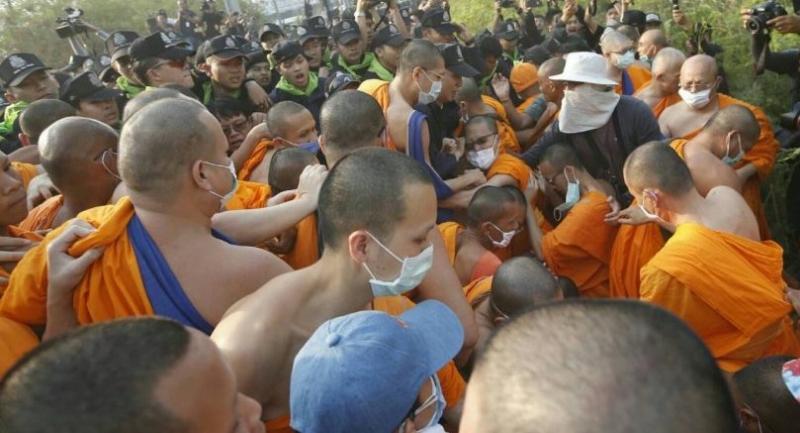 Dhammakaya Temple monks and followers clash briefly with police and Department of Special Investigation officials at the monastery in Pathum Thani yesterday.

Injuries in scuffles as authorities target ‘group that could be untouchable’

LEADERS of Dhammakaya Temple continued to call on supporters to press the junta to revoke its order sealing off the compound in Pathum Thani as a protracted stand-off dragged on after a conflict between monks and police early yesterday.

Nearly 4,000 police were stationed around the temple with a 10-metre buffer zone between them and praying monks and disciples. More negotiations were pending as of press time. National police chief Pol General Chakthip Chaijinda said he was confident that the situation at the temple would be resolved by this weekend.

But Deputy Prime Minister Wissanu Krea-ngam dismissed a rumour that the junta would revoke its order sealing off the temple compound.

The Supreme Sangha Council also became involved in the matter with senior monks discussing solutions for the conflict at an undisclosed location.

Representatives of the Sangha Council and Justice Ministry were also onsite to observe events after instructions from Phra Phrommunee, the Supreme Patriarch’s secretary.

Chakthip said temple supporters were allegedly using social media to get people to come to the compound, which made them fear that a third party would take the opportunity to cause chaos at the site. So, police had boosted forces in the area to 3,900 officers.

He said the Department of Special Investigation (DSI) would take legal action for any online incitement.

Chakthip said officers had been told not to use weapons or violence or they would face a disciplinary probe. He said they were there to perform their duty in line with Prime Minister Prayut Chan-o-cha’s order under Article 44 of the Interim Constitution.

Chakthip said police would attempt negotiations first. But he also warned people against gathering with more than four people, saying the police would take action against anyone violating the ban.

When asked about a monk’s claim that Phra Dhammachayo had left the temple on Thursday, Chakthip said police had intelligence that the former abbot, who is wanted on charges of money laundering and land encroachment, was still in Thailand.

The commotion at the temple occurred at 8.20am yesterday when 500 monks, reportedly wanting officers to leave so more laymen followers could join those inside the compound, were seen advancing aggressively towards lines of police and DSI officials. The latter were blocking a small road that leads to gates 5 and 6.

A 58-year-old woman caught in the middle of the throng was rushed to hospital after she fell and was stepped on. Three officers were also slightly wounded. He said authorities wanted the National Office of Buddhism (NOB) and Pathum Thani monastic officials to check “Bai Sutthi” monastic identity cards of monks at the temple, so only those registered as living at the temple could remain.

He said 564 monks would be allowed to attend Pali exams at Wat Khien Khet from today until Thursday, contrary to online rumours.

The temple’s top 14 monks, including Phra Dhammachayo, acting abbot Phra Dattajivo and temple spokesman Phra Sanitwong Wutthiwangso, failed to report to the DSI by 6pm on Sunday in line with a junta order, Paisit said.

Phra Sanitwong claimed the monks had not received the order, while Paisit said officers had presented it to them but they refused to accept it so it was left at the temple entrance. Paisit said officers would not cut power or water supplies to the temple yet, although they would consider doing so if supporters used violence against officers. He said that police had also filed charges of blocking traffic against disciples who parked cars in the middle of roads to the temple early yesterday.

NOB director Phanom Sornsilp said his agency had asked monastic provincial chiefs to warn monks not to come to the temple, which currently hosts 1,200 monks, because such action could violate the junta’s orders.

Prime Minister’s Office spokesman Lt-General Sansern Kaewkamnerd said Prayut was closely following the handling of the “sensitive case”, adding that the law must be enforced seriously to resolve the problems to prevent an “example of a group untouchable by law”, which would be unacceptable.

Deputy Prime Minister General Prawit Wongsuwan denied any intention to bully anyone, saying officers could be punished under Article 157 of the Criminal Code, regarding negligence of duty, if they failed to search the temple.

He also instructed Justice Minister Suwaphan Tanyuvadhana to talk with temple supporters about the operation, which would involve unarmed officers searching the compound.

Despite the commotion yesterday, Suwaphan said authorities had done a good job keeping control of the situation. He admitted that officials could not inspect the entire temple thoroughly because the compound was so huge.

“We have done our best and tried to avoid violence, otherwise the situation could get beyond our control,” he said.

Suwaphan said the DSI would report the outcome to the government.

Although Dhammachayo remained elusive, he said, the government would seek cooperation from the Sangha Council, senior monks and Dhammakaya supporters to solve the problem in the interests of peace and order.