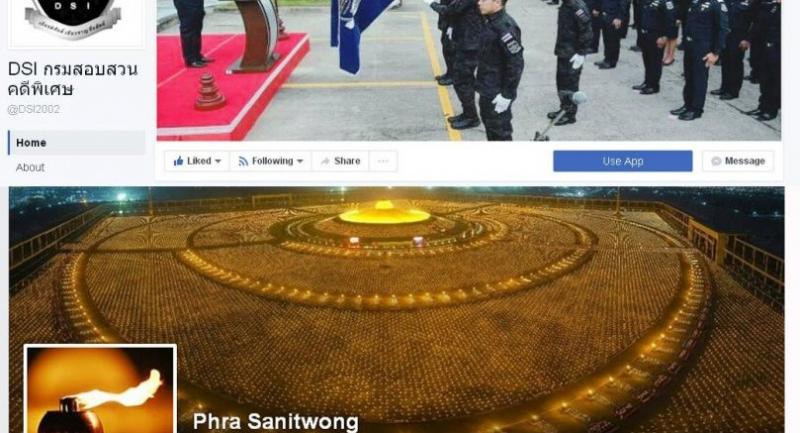 Arguments raged on social media between the Department of Special Investi-gation and Dhammakaya Temple.

JUSTICE Minister Suwaphan Tanyuvardhana has become a target in the fight between the Department of Special Investigation (DSI) and Dhammakaya Temple after he and his wife’s telephone numbers were posted on pro-temple Facebook pages, with notes urging the public to call him about the issue.

The posting on Phra Sanitwong Chareonrattawong’s Facebook page, which was later shared by the “Single Gateway: Thailand Internet Firewall” page and many others, carried a photo of Suwaphan and his wife.

“Those who want to complain [over] the excessive use of power by DSI against monks can do it here. Here are telephone numbers of Suwaphan and his wife Rungnapa,” the post read.

“At night, if you cannot reach the minister, you can try his wife. Anyone who seeks missing justice can telephone these numbers only.”

A source said telephone calls were made to the minister and his wife, even after midnight.

Suwaphan has already discussed the issue with DSI chief Pol Col Paisit Wongmuang seeking an investigation into Phra Sanitwong Chareonrattawong, a core leader of the temple.

The monk could possiblly face a libel suit, the source said.

The DSI, which comes under the Justice Ministry, and the temple have been caught in a conflict as the former has tried to apprehend the temple’s former abbot Phra Dhammachayo, who is wanted on several charges.

The DSI recently raided the huge temple in Pathum Thani but could not find the former abbot.

The department yesterday also took to social media to respond after temple supporters flooded social networks to accuse authorities of using excessive power against monks and followers of the temple.

DSI officials took to Facebook Live to say that every step of their search of the temple had involved unarmed officers who had done their utmost to avoid violence. Details were given in Thai, English and Chinese.

DSI page also showed photos of officials giving alms to monks with the caption “We are also Buddhists.”

The agency has even issued notices before it pilots drones over the expansive temple compound.

On its Facebook page, DSI wrote: “Phra Dhammachayo is wanted on charges of conspiring to launder money and receiving stolen property. This follows the fact that the offender received a transfer of money embezzled from members of the Klongchan Credit Union Cooperative by its former executive. As the money did not belong to the fraudulent executive himself, it was not a donation – as the temple falsely claimed.”

The DSI had given the monk |opportunities to prove his innocence on several occasions, but he had failed to cooperate, officials said.