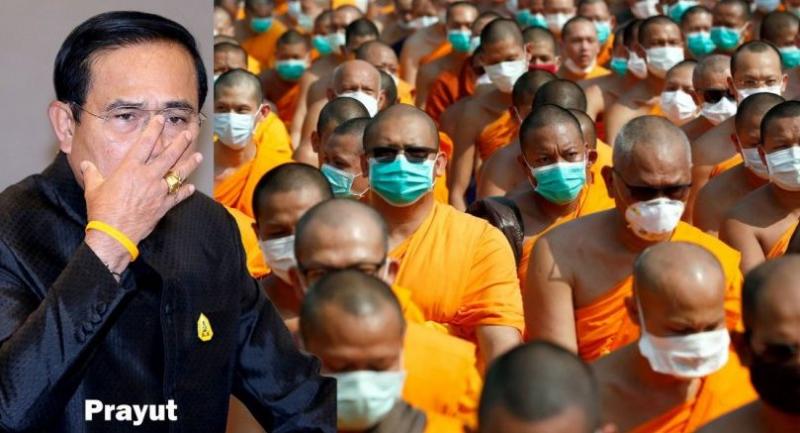 Prime Minister General Prayut Chan-o-cha yesterday said he would not cancel the order issued last week under the interim charter’s all-powerful Article 44 to declare the temple as an “area under control” until the former abbot gives himself up. “I confirm that I won’t cancel the order because this case is not yet at an end and the alleged wrongdoer hasn’t yet been brought to face prosecution. This place will be a controlled area until Phra Dhammachayo surrenders to enable his prosecution,” he said.

“Do not say I will seize gold statues, because we don’t know where things are and whether there are gold statues as claimed. How is it possible to make real gold statues when the Klongchan Credit Union Cooperative (KCUC) was broke? Think, you will know the answer to that,” he added, apparently referring to the temple’s alleged links to corruption.

Deputy Prime Minister General Prawit Wongsuwan said the junta’s order did not have a specific timetable, so officers did not need to apply for another warrant after the existing one expires.

“We can’t let [the temple] do anything at will, officers must be able to go in for however long it takes. We confirm officers will be unarmed to avoid clashes,” he said.

Army commander-in-chief General Chalermchai Sittisat yesterday urged officers to control their emotions when going into the temple to prevent clashes.

“It’s not an enemy military base. We’re all Thais, so officers should focus on enforcing the law and take their time rather than shedding blood,” he said. He was responding to a scuffle on Monday that led to five injuries near the temple’s gates 5 and 6. The National Institute for Emergency Medicine stated that three officers and two temple disciples sustained bruises and scratches in Monday’s scuffle.

Chalermchai said officers were enforcing the law with some difficulty due to the temple’s massive compound and the large number of supporters inside.

“What I am most worried about is confrontation. Officers must be very careful, patient and keep their emotions in check while proceeding with their duties or else it could lead to clashes,” he said. He added that 14 monks’ who failed to present themselves to the DSI by Sunday evening in line with a junta order would not suffer consequences as authorities were keeping in mind that everyone involved was a Thai compatriot.

“It might take some time. After monks and disciples in the compound pray and meditate to attain wisdom about all the facts, then this issue should be resolved,” he said.

Chalermchai added that officers would continue to screen people coming into the temple to prevent ill-intentioned third parties from entering and to screen non-residents.

As of 2pm yesterday, national police chief Pol General Chakthip Chaijinda said authorities were still waiting for approval for a search of the temple’s A and B zones.

Officers were yesterday checking the documents of individuals who presented “permits to enter the temple” issued by Klong Luang Police Station. Woranan said anyone attempting to enter temple without approval would face prosecution.

On Monday night, spikes and nails were placed under the wheels of 20 cars belonging to border-patrol police and members of the media members who were parked near the temple’s gates 5 and 6. The tyres of several cars were punctured.