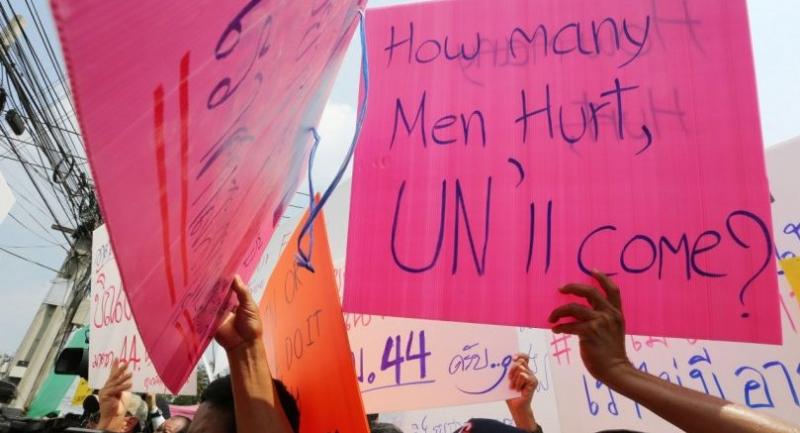 Senior clergy to be summoned again amid protests against Article 44 invocation.

DHAMMAKAYA TEMPLE disciples plan to file a complaint with the United Nations against the junta-led government regarding the invocation of the all-powerful Article 44 to declare the temple compound a “controllaed area”, Phra Sanitwong Chareonrattawong, the communications chief of the temple, said yesterday.

As the search operation at the temple entered its eighth day yesterday, police were still unable to find former abbot Phra Dhammachayo, despite an enormous police presence, numerous negotiations, a threat to cut power and water, and the strict screening of visitors entering and exiting the compound.

Police yesterday obtained two new arrest warrants for Dhammachayo for encroaching on a national park in Phang Nga, according to Royal Thai Police spokesman Krissana Pattanacharoen. So far, for the wanted monk alone, 13 arrest warrants have been issued.

At about 6am yesterday, 50 troops demolished a barrier that had been set up to block a gate near the Boon Raksa building where they believed the fugitive monk was hiding. But the move to enter the compound only led to a confrontation and tussle between troops and about 500 disciples and monks.

The troops eventually withdrew after failed negotiations while temple monks and disciples tried to set up tin sheets and concrete pipes as a defence.

Phra Sanitwong, who inspected the scene after the scuffle, said that if the junta order is revoked, the temple would be willing to allow officers and journalists to search the compound.

He said senior monk Phra Thatta-cheevo had not resisted the search.

Phra Sanitwong also said disciples were planning to petition the UN about the Article 44 order, alleging the use of violence resulting in injuries to temple supporters and a lost diamond earring in the Monday tussle at Gate 5. At 1.30pm, Klong Luang district chief Sirichai Traisansri, Klong Luang Police Station superintendent Pol Colonel Khemapat Phothipitak and National Office of Buddhism (NOB) officials led a team to negotiate with temple monks and disciples who were gathered at the Klong Luang Central Market in protest. Sirichai said he and officials were trying to tell protesters to return to their residences because the market owner had already filed a police report saying he had nothing to do with protest. However, protesters remained, saying the Article 44 order must be revoked before they disbanded.

It was also reported that officers had separately apprehended six monks and 22 lay followers at an herb garden near Gate 4 yesterday and submitted them to a three-hour questioning session before releasing them at 1pm. A source at the DSI said the lay people had promised not to visit the temple while the operation was ongoing.

The six monks – three registered with Dhammakaya and the rest with temples in Uttaradit and Kanchana-buri – were encouraged by NOB officials to cooperate and sent back to their own temples, the source said.

Prime Minister General Prayut Chan-o-cha said yesterday at Government House that he had given permission for officers to gradually use light to heavy measures using their own discretion. Urging the fugitive monk to surrender and enter the judicial process, Prayut said the government had no intention of destroying a religious site.

Deputy Prime Minister General Prawit Wongsuwan said the operation would go on until the wanted monk is found.

Meanwhile, Justice Minister Suwaphan Tanyuvadhana said the DSI and police would enforce the law, although he did not elaborate.

In an interview on Facebook Live with Nation Multimedia Group’s digital journalist Suthichai Yoon, the minister said officers and soldiers were legally allowed to enter the temple to find Phra Dhammachayo. “We are not there to negotiate or to take the temple’s conditions and consider them. We are there to enforce the law,” he said.

However, Suwaphan said every party involved would avoid violence. Police will summon the temple’s leaders again after they failed to report themselves to police, he added, saying that they could be arrested if they resist.