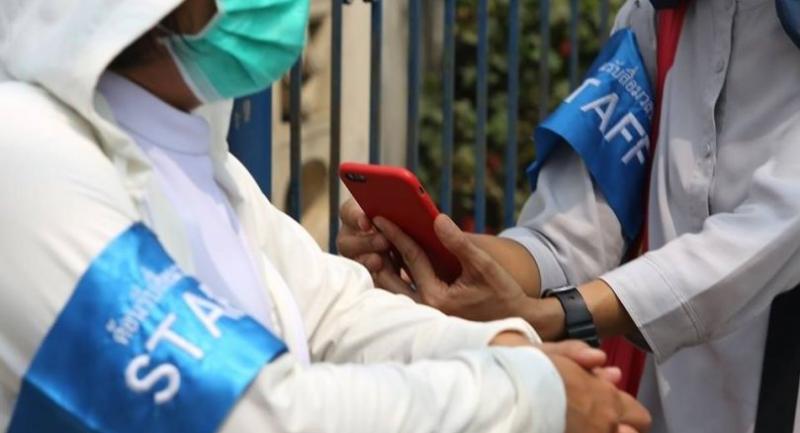 Reporters check their smartphone after the Internet signal has gone Friday.

When a client complained about poor signal in the area near the besieged Dhammakaya Temple, the company apologised for the inconvenience and said that “the National Broadcasting and Telecommunications Commission has asked AIS for cooperation to restrict mobile phone usage in areas under control [declared by Article 44] in Pathum Thani.

However, the signal block was meant to be part of a covert operation at the besieged temple.

“[Blocking the phone signal] is a secret operation. No one should leak, tell, or confirm the operation,” a source told The Nation.

“But the AIS reply to its client is confirmation and it is a real evidence,” he said.

The source said that officials ordered AIS to remove the message from Facebook to destroy the evidence.

A telecom industry source told The Nation that the company followed an order to designate the affected area a controlled area. So far, there has been no official explanation from NBTC about the order.

The Department of Special Investigation (DSI) and police have been searching the temple for fugitive abbot Phra Dhammachayo since February 16. The fugitive ex-abbot is wanted on money laundering charges.

The operation continued for seven days but officers failed to locate the monk.

The DSI then elevated its search by contacting the NBTC to have all phone operators – AIS, Dtac, TrueMove H, TOT – block mobile phone and Internet signals in and around the temple.

In fact, the order to block the phone and internet signal has been in place since Wednesday but users were not aware until the AIS call centre confirmed the order.

At 12.10pm on Friday, a reply from the AIS Call Centre on Facebook to a user who complained about poor signal, said: “Hello….[the name was blacked out]. We apologise for the inconvenience. Since the NBTC has asked AIS for cooperation to restrict mobile phone usage in areas under control [declared by Article 44] you will not be able to use your mobile in the following affected areas:

- Wat Dhammakaya and surrounding areas of around 500 metres

The Facebook reply was then captured and circulated on social media, which was official confirmation of the order to cut mobile phone and internet usage in the area.

A NBTC source said the regulator was upset with the AIS call centre for confirming the blocking to the public.