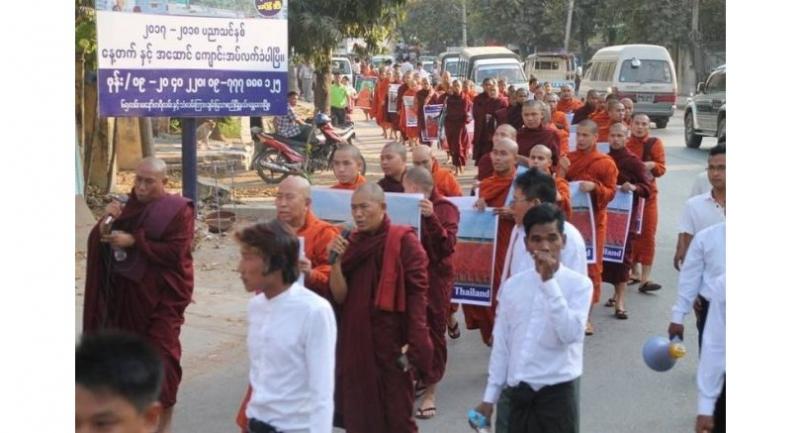 MYANMAR’S EXTREMIST Buddhist monk Ashin Wirathu led a rally in Mandalay on Thursday to support the Dhammakaya Temple, which is at loggerheads with Thai authorities over the ongoing hunt for former abbot Phra Dhammachayo.

His move appeared to inspire another yesterday as Myanmar Buddhist nationalists rallied outside the Thai embassy in Yangon. More than 100 people, including dozens of robe-clad monks, gathered |waving Buddhist and national flags and chanting: “May the teachings of the Buddha and Dhammakaya temple stay alive forever.”

“If the monastery is destroyed, the Buddhist religion will disappear in Thailand,” protesting monk Thu Mingala told AFP.

Posted on his Facebook page, Wirathu said some 200 monks and lay Buddhists gathered in Mandalay to support the temple. They held posters saying “Pray for Buddhists in Thailand [that the] Dhammakaya abbot may [have a] safe, healthy and long life”.

The extremist Buddhist organisation, known as Ma Ba Tha in Myanmar, has played a prominent anti-Muslim role in the country over past years. The monk and his group made hate speeches against Muslims.

Labelling himself as a radical Buddhist, Wirathu, 48, was arrested and sentenced to 25 years in prison in 2003 for his sermons and for leading the militant movement called 969.

He was released in 2011 under government amnesty and made his name when Thein Sein took the helm of a quasi-civilian administration and allowed a certain degree of freedom of expression.

In 2012, when the conflict between Buddhists and Muslim erupted in Myanmar, Wirathu and his organisation led a rally calling on then President Thein Sein to deport Rohingya Muslims to a third country. Since then a number of Muslims have been killed in sectarian riots and hundreds of thousands have been displaced.

Time magazine, in its July 1, 2013, edition, put him on their front cover with the headline: “The Face of Buddhist Terror?”

While it remained unclear how strong his relationship is with the Dhammakaya Temple and former abbot Dhammachayo, Wirathu exposed some of his ties with the controversial temple when he joined activities during Makha Bucha Day in February last year.

On the same visit, Wirathu attended a seminar on Crisis in the Buddhist World at the Asian Institute of Technology Conference Centre, which was hosted by World Alliance of Buddhist Leaders on February 23 last year.