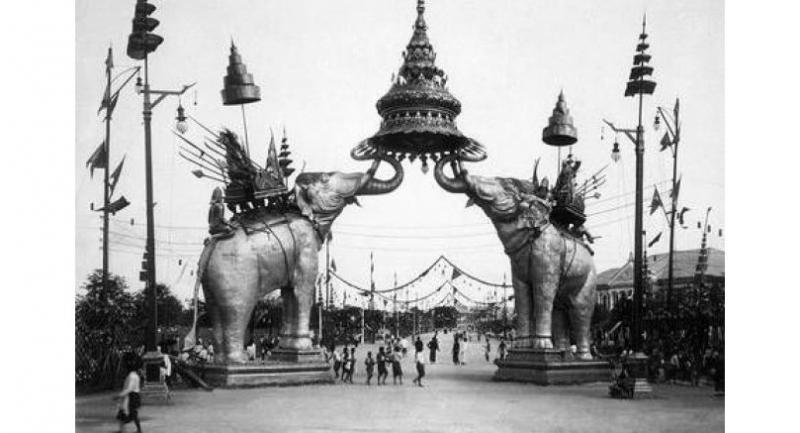 Two huge elephants carrying seats form a triumphal arch in Bangkok, Thailand. It was built in honour of the late Chulalongkorn, king of Siam, who visited Europe in 1897 Source: Getty Images

By AJAY KAMALAKARAN
Russia Beyond The Headlines
Asia News Network

In 1897 seasoned diplomat Alexander Olarovsky was appointed by Tsar Nicholas II as the first Charge d'Affaires and Consul-General of Russia to Siam. He was specifically tasked with opposing British expansion in Indochina and brokering peace between Siam and France.

In the last years of the 19th century, Siam, as Thailand was then called, was in a precarious position. The British colonizers already occupied India and Burma, and the French made forays into the Indochina peninsula.

The Franco-Siamese War of 1893 led to Siam ceding Laos to the France, and literally turning into a buffer state between the British and the French.

It looked like only a matter of time before the country would be ruled by a colonial power, but Siam had one trump card - the personal friendship cultivated between King Chulalongkorn and Tsar Nicholas II.

“The welcoming attitudes of Tsar Nicholas II, to a great extent, influenced the Siamese diplomatic strategy in dealing with European expansion,” Natanaree Posrithong wrote in an academic publication titled ‘The Russo-Siamese Relations: The Reign of King Chulalongkorn.’

In 1897, King Chulalongkorn was treated like an honored guest of the Russian Tsar in St. Petersburg. The countries then officially established diplomatic relations.

When Nicholas II thought of sending an illustrious diplomat to the kingdom, his first choice was Alexander Olarovsky, who was appointed as the Charge d'Affaires and Consul-General of Russia to Siam.

A seasoned diplomat, Olarovsky had served in the Russian missions in San Francisco and New York.

“This appointment of to the first Russian Consul in Bangkok aims to institute a firm diplomatic relationship between the two nations besides our brotherhood and our great friendship that have already been established,” Nicholas II said in 1897.

“Olarovsky wrote to the Tsar that the King had granted the best building in Bangkok, close to the Grand Palace, to set up the first Russian Consulate,” Posrithong wrote. At the opening ceremony, more than 300 people were present, including a large number of European diplomats.

The Russian diplomat’s role was far from ceremonial.

“The confidential report from the Russian Foreign Ministry to Olarovsky, dated the day he was appointed as Consul-General in Bangkok, demonstrates a significant evidence of Russia’s concerns over Siam’s situation,” Posrithong wrote.

“The report meant to prepare Olarovski to understand the root of the Siamese-Franco-Briton conflict and to confirm the main objectives of his new task as the first Consul-General in Bangkok.”

Despite an agreement between Britain and France to respect Siam’s borders, both countries showed little intention of honoring it, with the British expanding to the Malay Peninsula and the French occupying Cambodia.

“Siam was sandwiched between these two powers and Russian influence was crucial to stop them,” Thunjira Wattaporn, a researcher based in Chiang Mai told RBTH.

“The Russians had some say with the French since there was a Franco-Russian alliance, but the British, who were involved in the ‘Great Game’ with Russia in Afghanistan, were seen as a serious threat by Olarovsky.”

She added that Russia was also fearful of Siam falling under Britain’s orbit since many Thai officials were educated in the country and admired the values they saw in the country.

The Russian diplomat was tasked with opposing “the expansion of Britain in Indochina by diplomatic means,” Posrithong wrote. “In addition, Nicholas II hoped that Olarovsky would serve as the mediator to compromise and balance the power between France and Britain, while helping Siam maintain its sovereignty.”

The Russian nurse who became a Thai duchess

Olarovsky worked tirelessly as the Tsar’s envoy in Siam to protect the kingdom of Nicholas II’s friend. He used his good offices with the French to convince them to return Chantabhuri to Siam. The province, bordering Cambodia, was under French control since the Franco-Siamese War.

“Without Olarovsky, the Franco-Siamese relationship might have had died completely after 1893,” Posrithong wrote. “In contrast, within four years, there was a slight sign of peace between the two nations, mostly through the effort of the Russian Consul-General.”

Olarovsky’s efforts, though largely successful in protecting the Chakri Dynasty, could not yield to lasting peace between France and Siam.

Russia’s humiliating loss to Japan in the 1904-5 war and a fear of Japanese expansion to Indochina led Moscow to eventually soften its approach towards its French allies.

“Olarovsky’s diplomatic maneuvers definitely helped keep the British out,” says Wattaporn. “He even worked with British counterparts in Bangkok and along with them, help found the Royal Bangkok Sports Club.”

Olarovsky shared a passion for horses with the British and was the first person in Thailand to breed racehorses.

The British Empire did not cross the Burma-Siam border until World War II, when the kingdom was under Japanese occupation.

Russia managed to maintain its warm ties with Siam until the revolutions of 1917, when Bangkok like all other allies of the Russian Royal Family refused to recognize the Bolsheviks.