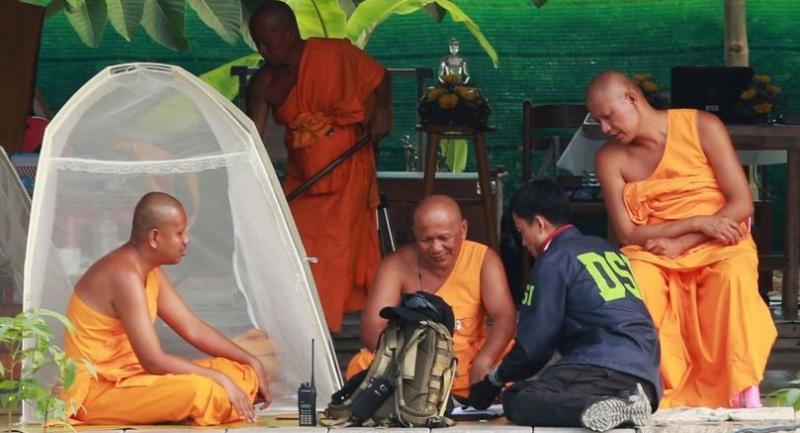 POLICE have found moves on social media to mobilise Dhammakaya Temple supporters, although no political connection has been confirmed so far, the national police chief said yesterday.

Pol General Chakthip Chaijinda said the Royal Thai Police were working with the Department of Special Investigation (DSI) to monitor activities by a group of people mobilising demonstrators at the controversial temple in Pathum Thani.

The monitoring would cover people living in neighbouring countries “trying to stir people up”, the police chief said.

“We have found movements on social media, with attempts to provoke people. The authorities are keeping an eye on this,” Chakthip told reporters yesterday.

Authorities have laid siege to the huge 2,100-rai temple for 12 days after Prime Minister Prayut Chan-o-cha ordered a search for former abbot Phra Dhammachayo. The 72-year-old monk is wanted for money laundering and accepting stolen assets in connection with a large sum of money embezzled from a credit union.

Prayut, in his capacity as head of the National Council for Peace and Order, had invoked his power under Article 44 of the interim charter in issuing the order. But officials have been unable to conduct a thorough search of the compound due to resistance from monks and followers, which has prompted a stand-off with no end in sight.

Agencies involved in the hunt for Dhammachayo will meet this week to discuss a possible revision of the original plan, Justice Minister Suwaphan Tanyuvardhana said yesterday.

DSI chief Paisit Wongmuang, who is in charge of the operation, will chair the meeting, according to Suwaphan, who said he saw no need to make any change to the personnel involved at the moment.

His comment came after speculation that someone else may be put in charge of the operation.

Suwaphan said he had not suggested the appointment of Pongporn Parmsneh as the new head of the National Office of Buddhism. On Saturday, PM Prayut – invoking his power under Article 44 – appointed Pongporn, director of the DSI’s Bureau of Taxation Crime, to replace Pranom Sonsill.

Suwaphan said Pongporn would work with the monastic community and relevant authorities in dealing with the matter. He also called on Dhammakaya to “change its standpoint” in order to allow the stand-off to end for the benefit of society.

The NCPO yesterday rejected a claim that the junta chief’s order on the temple was “a tool to destroy Buddhism”.

“That allegation is untrue. It is an attempt to distort facts and discredit authorities,” NCPO spokesman Colonel Winthai Suvari said the junta order was aimed at facilitating the search for a person wanted by the law but religious activities at the temple were not affected.

Meanwhile, a DSI search of an area at the back of the temple yesterday found 12 monks camping there. They had no “Bai Sutthi” identity cards and claimed they were newly ordained.

The search followed a tip-off that a group of monks and laymen were staying in the area where the Klong Luang Youth Centre is located on a 52 rai (8.3 hectare) plot.

Earlier on Sunday night, a 73-year-old retired police general was detained after police searched his car and found bulletproof vests and knives. Pol Maj-General Rungroj Pekanan was held during a search at a checkpoint near the temple. The officer Checkpoints were set up around the temple as authorities were enforcing the junta order.in charge of the checkpoint said Rungroj drove a Lexus and tried to pass, but he looked suspicious so the soldiers stopped him.

Rungroj said he was driving from a market nearby and was on his way home in Bangkok’s Ramkamhaeng area. He was escorted for further questioning at Klong Luang police station.

His vehicle had a temple sticker on the windshield. Also found in his car was a banner that said a man named Anawat Thanacharoennat was a Buddhist hero who sacrificed his life in demanding the junta order to be revoked. The 65-year-old man hanged himself on Saturday night from a high-rise radio antenna in an apparent protest against the ongoing siege of the temple.