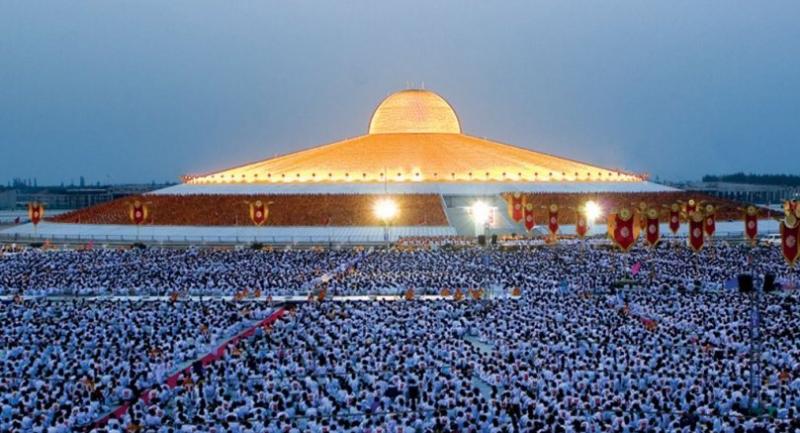 WHILE THE whereabouts of fugitive former abbot Phra Dhammachayo is still unknown, authorities have taken control of the controversial Dhammakaya Temple and have begun scrutinising its operations and monks’ activities, officials said yesterday.

The Sangha Supreme Council (SSC) on Thursday set up two panels – comprising representatives from provincial officials, police and the National Office of Buddhism (NOB) – to manage the temple, according to Booncherd Kittitharangkoon, director of the Office of the Secretary-General of the SSC.

The panels, headed by Ecclesiastical Region 1 chief Phra Thepsuthee and Pathum Thani monk chief Phra Theprattana-suthee, will oversee and provide guidance and instruction to Dhammakaya’s acting abbot to maintain the daily operations of the temple and maintain law and order.

Buddhism Office director-general Pongporn Parmsneh said the SSC had also acknowledged the Department of Special Investigation (DSI) had proposed a nine-point plan to solve the Dhammakaya problem to the Justice Ministry recently, which would eventually be forwarded to Prime Minister Prayut Chan-o-cha.

The plan, which has not yet been approved by the government, included a request for the junta leader to lift a special order under Article 44, which authorised the DSI and security officials to search for Dhammachayo last month.

As the order under Article 44 is still in effect, the temple and the surrounding Klong Luang district are still a specially controlled area, according to DSI chief Pasit Wongmuang.

He said DSI officers were making reports on the impounded temple buildings and items, adding that a hyperbaric chamber would be sent back to the lender, Yanhee Hospital.

Pongporn said the DSI’s nine-point proposal calls for a joint operation centre for peace and order to be set up at the temple to ensure activities are done in accordance with Dhammavinaya (disciplines) and the law, and also gather information about Dhammachayo.

As part of the proposal, the Interior Ministry would be assigned to probe the Dhammakaya Temple Foundation to determine if any illegalities had been committed, and the Finance Ministry would inspect its financial situation including tax payments, he said.

The Buddhism Office would establish a committee to check if the temple’s teachings and propagation methods went against the Dhammavinaya, he added.

The Ministry of Digital Economy and Society would be assigned to monitor any online messages of incitement, Pongporn said. As well, the National Broadcasting and Telecommunications Commission would block or cancel the satellite TV broadcasting operations of the Dhammakaya Media Channel until concrete solutions were implemented.

Next week, probes into three monks under the Dhammakaya network, who allegedly used donation money to buy properties, would also be launched, Pol Lt-Colonel Pakorn Suchiwakul, director of the DSI financial and banking division said yesterday.

The agency summoned the monks, whose names appeared on donation cheques from the former chairman of the Klongchan Credit Union Cooperative Supachai Srisuppa-aksorn, who is currently in jail for embezzlement, to testify to DSI investigators on April 3-5.

The monks, each of whom reportedly received Bt60-70 million in donation money, were Phra Khru Palad Wijarn Theerangkuro who built a youth centre in Lop Buri; Phra Wirat Thitarattano who built a meditation centre in Phichit; and Phra Prayoon who bought two plots of land covering 27 rai in Chumphon.