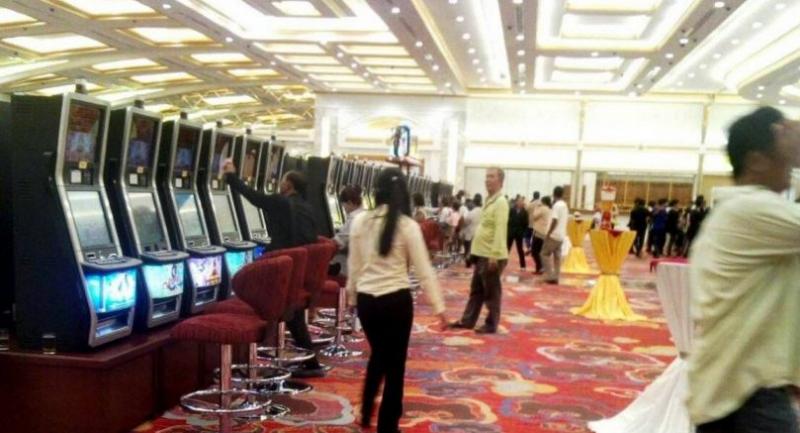 THE controversial new casino, which is allegedly sitting on territory claimed by both Thailand and Cambodia near Buri Ram.

But hundreds of visitors from outside the province were barred from joining the opening ceremony – with no clear reason given by security officers.

A source said some 300 VIP guests were invited by casino bosses to attend the party, including free performances by Thai pop singers and lucky draws for guests.

Some high-profile businessmen and officials also attended the event.

However, hundreds of visitors who were not native to Ban Kruad district in Buri Ram, near where the casino is located, and people without invitations were not allowed to attend.

Security officers stationed near the Chong Sai Taku checkpoint screened visitors closely without offering any clear reasons why they were not allowed to enter. They just said they were complying with an order given to them, some visitors said.

Cha Anurak, from Maha Sarakham province, said he travelled to the checkpoint with relatives and friends, hoping to visit the casino and try his luck.

But officers at the checkpoint did not allow them to cross the border. Only people with invitations and Ban Kruad residents were allowed, he was told.

“I was disappointed and felt angry as I wasted the money and time travelling here without being able to enter the casino,” Cha said.

Two other visitors from Loei province, Wuttinant Atoirum, 42, and Preecha Suksri, 33, said they learned about the opening and wanted to visit the casino, but were barred from crossing the border without any prior notice.

They claimed they had crossed the border to buy goods previously, but had no luck this time.

Major General Thanes Wongcha-oum, the Thai Army Suranaree Commander responsible for the area, denied having any special rule in place, saying the military was following normal procedures for border crossings. Passes were needed for those wishing to travel to nearby areas, but if they wished to go deeper into Cambodia, they had to show passports.

The new casino has been in the spotlight since anti-corruption activist Veera Somkwamkid claimed in Facebook posts a few weeks ago that it was located on “overlapping” territory claimed by both Thailand and Cambodia.