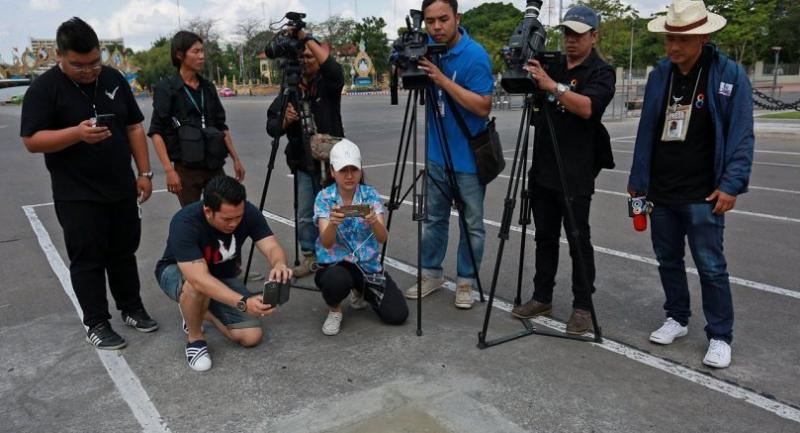 THE MYSTERIOUS disappearance of a historically significant “memorial peg” marking the so-called Siamese Revolution of 1932 triggered an outcry yesterday even as authorities remained silent over who was responsible.

It was discovered on Friday that “Mhud Khana Ratsadon”, or the People’s Party Memorial Peg, had been replaced by a new one with altered wording.

The commemorative plaque was fixed to a spot at the Royal Plaza where the group’s first statement was read to announce a revolution against absolute monarchy. The group was led by Western-educated military officers and bureaucrats.

A message on the peg read: “At dawn on June 24, 1932, the People’s Party on this spot gave birth to the constitution for national prosperity.”

He also refused to comment about the issue during a telephone interview with The Sunday Nation yesterday.

Police in Dusit district, where the plaque was located, said they were not sure who had removed it and were investigating. Senior officials at the Fine Arts Department and the Dusit District Office, which has jurisdiction over the area, also pleaded ignorance.

The new plaque’s message reads: “It is good to worship the Buddhist trinity, the state, one’s own family, and to be faithful to one’s monarch and allow oneself to be the engine that brings prosperity to the state.”

A Facebook page called Mhud Khana Ratsadon alerted the public on Friday that the historic brass plaque had been replaced with a new one with different wording that says nothing about the 1932 revolution, which led to the country replacing absolute monarchy with constitutional monarchy.

The government’s main communication means with the press – the chat room Line application – was still active but there was no explanation about the incident.

Activists said the plaque’s removal was a bid by royalist conservatives to rewrite history. Certain groups of people had previously threatened to remove the peg.

NDM said yesterday that police as well as district office officials responsible in the area should check CCTV footage and use available resources to find the missing brass plaque.

It said the plaque, which marked the spot where the Khana Ratsadon or the People’s Party read its manifesto out more than 80 years ago as they successfully and bloodlessly achieved their goal of moving the country from absolute to constitutional monarchy, was public property and belonged to the people.

National Artist Theeraphap Lohitkul yesterday pointed out that the theft of the 1932 Siamese Revolution peg was an act of destroying historical evidence, which caused great damage to the country, and might have been aimed at wiping out memories of the Khana Ratsadon.

However, Theeraphap said the attempt would have the reverse effect and more people would seek and research the history of the origin of the peg and the 1932 revolution.

The national artist said it was a shame that the People’s Party peg had been replaced. It was an important historical evidence representing the political change in 1932.

Theeraphap said he did not think the plaque had been removed for safekeeping.

“Such an important national property should be kept in a museum and be replaced with a mock-up,” he said. But the plaque had been replaced with another with a completely different message, he added.

The national artist said all historical evidence that told stories about the country’s past – whether positive or negative – should be preserved so that people of later generations would know what the country had been through.

He said the plaque was one tangible evidence and was historically significant. It was worth conserving for the people of later generations, he said.

“Even sites where millions of people were massacred, such as the concentration camps in Germany, have been conserved. They are for the younger people to learn from and not repeat the history,” Theeraphap said.

Thepmontri Limpaphayorm, a historian suspected by many pro-democracy activists as being responsible for the peg’s disappearance, denied any knowledge about removal of the historical item, insisting he had only learned about the incident from news media.

Accusers referred to Thepmontri’s Facebook post in October, which featured a photograph of the plaque with a message that said it was looking for its owner, and told the owner to take it away by the end of the year if he or she wanted to keep it.

In the post, Thepmontri threatened that he and his friend would remove it or destroy it.