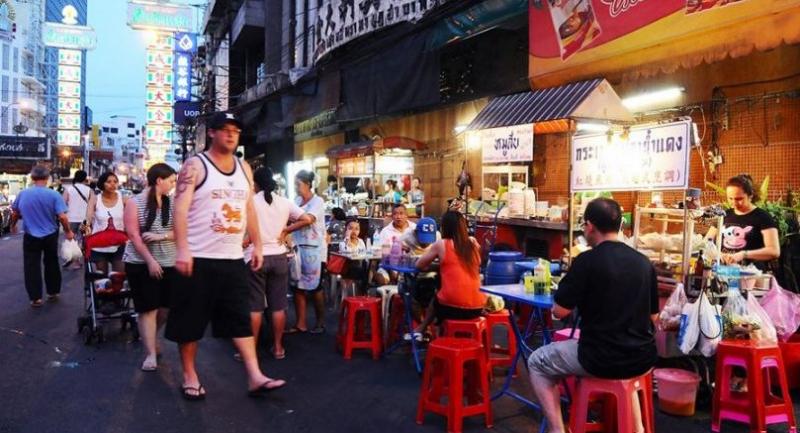 Despite international acclaim, Yaowarat and Khao San Road next targets of cleanup

STREET FOOD vendors will disappear from Bangkok by the end of the year in the interests of cleanliness, safety and order, the Bangkok Metropolitan Administration (BMA) says.

In the capital, which is internationally recognised for its street food, famous locations such as Chinatown/Yaowarat and Khao San Road would be cleared of vendors in a bid to beautify Bangkok.

A month after the city was named the finest street food destination in the world by CNN for the second year, the Bangkok Metropolitan Administration (BMA) continued its operation to reclaim the pavements for pedestrians and announced that vendors would be banned entirely from the capital’s streets.

The CNN report said that “it is impossible to avoid street food in Bangkok, where sidewalk vendors in different parts of the city operate on a fixed rotation. It said that some take care of the breakfast crowd with sweet soymilk and bean curd, others dish up fragrant rice and poached chicken for lunch. The late-night crowd offers everything from phad thai noodles to grilled satay”.

Wanlop Suwandee, chief adviser to Bangkok’s governor, said yesterday that the internationally recognised areas of Yaowarat and Khao San Road would be the next target after they successfully cleared the pavements of food vendors in areas such as Siam Square, Pratunam, and the flea market under Phra Phuttayotfa Bridge.

“The BMA is now working to get rid of the street vendors from all 50 districts of Bangkok and return the pavements to the pedestrians. Yaowarat and Khao San Road will be our next goal in clearing out illegal vendors,” Wanlop said.

While Wanlop said he was grateful for CNN’s recognition of Bangkok as the world’s best street food city, he said cleanliness and safety in the streets were the BMA’s priorities.

“The street vendors have seized the pavement space for too long and we already provide them with space to sell food and other products legally in the market, so there will be no let-up in this operation. Every street vendor will have to move out,” he said.

Piyabutr Jiuramonaikul, president of the Khao San Business Council, said he did not know about the BMA’s plans to manage the street vendors in Khao San Road and there would have to be further discussions with the city authority.

“There are more than 200 street food vendors in Khao San Road and they are the uniqueness of our district that attracts many tourists from around the world,” Piyabutr said.

Bangkok resident Romdheera Phruetchon said that while she agreed with the BMA’s efforts to create clean and tidy pavements, this could coexist with the preservation of city’s world-famous street food.

“The BMA should set up a zone for the street vendors, so they can keep their jobs and preserve the charm of Bangkok’s street food,” said Romdheera. “The people can benefit from selling goods, while the tourists can enjoy the unique street food of our city.”