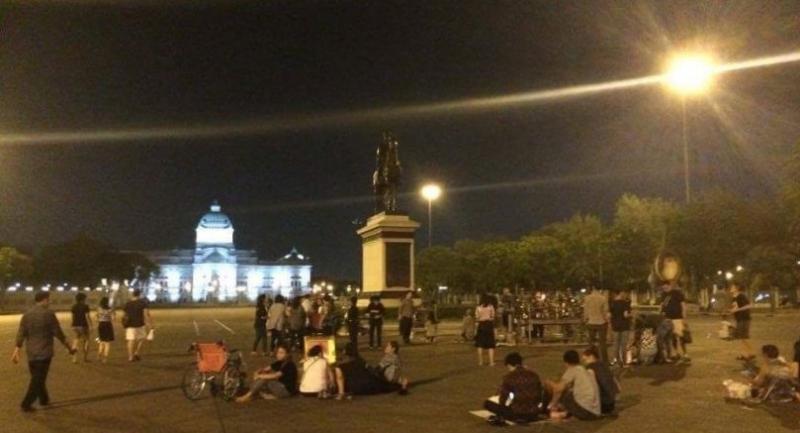 The Royal Plaza at night.

AROUND 9PM on Thursday, Bangkok’s Royal Plaza was filled with dozens of people who came to worship at the equestrian statue of King Chulalongkorn with yellow garlands of marigolds and bunches of pinkish roses. It has become a tradition to do this on Thursdays, the day the late King died.

Some sat in groups, around a small table filled with worship items, chit-chatting to kill time while |waiting until their lit incense finished.

Portable fences were put at the front and back of the compound. They are normally open for the public until midnight, but things were a little different from days before Songkran.

Dozens of metropolitan police, plus plainclothes officers were deployed and on guard 24/7 around the compound, and especially the spot where a new plaque was embedded to replace the 81-year-old Constitution plaque metres away from the King’s statue.

“You should not take a photo, as it is too much of a hot issue on social media,” a plainclothes police officer said to The Sunday Nation when we went to observe the site. Police were reportedly deployed to guard the site last Tuesday and people have been prohibited from taking photos of the new plaque since then.

A few worshippers walked further from the statue to the plaque to have a look and take photos – shortly before they were stopped and urged to leave.

“When they [people] came to worship the statue, some would then walk towards the [old] plaque to take a look or take photos. You know, it’s the Constitution plaque, but it’s gone,” one regular at the site said.

The historical plaque, marking the Siamese Revolution of 1932, has mysteriously gone missing. Some photos shared and scrolled down on social media pages, along with accounts of “regulars” and concerned authorities as checked by the Nation have shown that between late last month and April 6, at least two distinctive activities took place at the Royal Plaza before the public was alerted last Friday that the plaque was missing.

The regular visitor we met said that late last month the statue of the former King was renovated, with some framework set up and covered with translucent green sheets. However, from April 4 to 6, there were a few tents set up next to it – around the spot where the plaque was located.

However, the tents were closed and draped with cloth, so the regulars could not see anything inside.

“But afterwards, the tents were gone, and then I learnt from the news as well that the plaque was gone,” one of the regulars said.

Other regular visitors made similar observations to The Sunday Nation, saying that they saw a couple of tents near the statue of King Chulalongkorn a few days before Chakri Day on April 6.

The tents were located some metres away, on the right side of the equestrian statue, where the plaque was.

On April 5, the Plaza also closed early – at 9pm, due to arrangements needed for Chakri Day, they said.

Some photos, as reported by Prachatai online news website, show that as late as March 28 the framework was set up around the statue. Other photos, checked by The Sunday Nation and taken at least on April 1, also show individuals working inside the sheeting. However, no tents were seen set up nearby.

The tents appeared in some photos taken on April 4 to 5. But on April 6, there were no tents seen on the spot.

The Sunday Nation tried to contact the Fine Arts Department, but was only told that they had worked on the statue during this period of time.

No further details were allowed without permission from the department’s chief.

Sarttarin Tansoon, a political science lecturer at Kasetsart University, told The Sunday Nation that a group of his students saw the original plaque during a field trip to the Royal Plaza from April 1 and 3.

On April 8, another group of his students went to the Plaza to see the plaque, but found it had been replaced.

An official at Dusit district told The Sunday Nation that Royal Plaza is overseen by several authorities. While Dusit district administration takes care of overall tidiness, the police are in charge of security. The Department of Public Works and Town and Country Planning is in charge of the road surface, while the King’s statue is overseen by the Fine Arts Department.

The Bureau of the Royal Household (BRH), meanwhile, is authorised to permit activities or events to be held on the Plaza, the official said.

The official confirmed the Fine Arts Department’s work at the statue, saying they had learnt about some cleaning and repairs to the statue earlier this month. However, the officer declined to acknowledge anything in regard to the tents, saying they had no idea about tents seen near the statue.

The disappearance of the |plaque has ignited a big issue in Thailand between pro-democracy citizens, plus state authorities and royalists.

The plaque was fixed on the ground of the Royal Plaza in 1936 |on the spot where People’s Party leader Phraya Phahonphonpha-|yuhasena stood to announce the |end of absolute monarchy, paving |the way for a constitutional monarchy.

While activists want state authorities to conduct an investigation to find the missing plaque and prosecute those who replaced it, police and government officials have argued that they do not own it, claiming that the plaque had no historical value to necessitate an inquiry or prosecution.

The Bangkok governor’s secretary Yutthapan Meechai told the press on Wednesday that all 11 CCTV cameras installed on traffic and light poles in front of the Royal Plaza had been removed for maintenance beginning on March 31.

The cameras belonged to the BMA’s Traffic and Transportation Department, which was wholly responsible for removal of the cameras, he said.

The Fine Arts Department, meanwhile, said on its Facebook page that the missing plaque did not qualify as an antique as defined by the Ancient Monuments, Antiques, Objects of Art and National Museums Act as the plaque merely marked a spot where a revolutionary declaration was made.

A message on the plaque reads: “At dawn on June 24, 1932, the People’s Party on this spot gave birth to the constitution for national prosperity.”

Amid these curious official |reactions, people have been left |wondering: did state officials sanction or take part in this change of plaques? Or did outsiders seize a |rare opportunity to undertake the change?