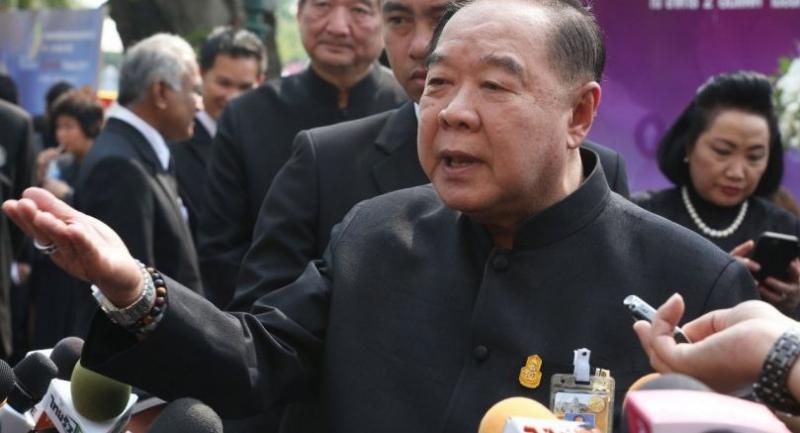 THE MILITARY government yesterday confirmed its decision to buy a submarine from China because of its cheapness and the fact that many neighbours have the vessels – but observers said the warship was of little strategic value and questioned its price and quality.

The Cabinet quietly approved the Navy’s proposal to spend Bt 13.5 billion on one Yuan-class submarine and instructed the Navy’s commander, Admiral Na Arreenich, to finalise the purchasing contract with the designated Chinese manufacturer soon.

“The reason we chose Chinese-built submarines is because they are the cheapest when compared to other countries,” Deputy Prime Minister Prawit Wongsuwan told reporters yesterday. The submarines were needed to “protect our natural resources in the Andaman Sea”, he added, while stressing that neighbouring countries “all have submarines”.

The Navy planned to obtain three S26T Yuan-class submarines for Bt 36 billion. The first one approved by Cabinet last week would be delivered within the next six years. Two more are expected to be purchased over the next decade.

In Southeast Asia, Singapore and Vietnam have already commissioned six submarines each to their fleets while Indonesia and Malaysia have two each. All are buying more amid looming threats to their maritime security due to territorial conflicts over the South China Sea.

The China Shipbuilding Industry Corp will be the likely main contractor for the Thailand-bound submarine. If the contract is secured, Thailand will become the company’s second foreign customer after Pakistan.

A security expert said yesterday that, while it is not unusual for the military-installed government to favour purchases of weapons and vehicles for the military, it is necessary to render civil benefits of such to the public.

“Reasoning to gain large-scale vehicles to maintain military balance during war-free time is rather conservative,” said Rangsit University’s Wanwichit Boonprong. “What the public becomes intrigued about with this issue is the military hardware’s worthiness to people as mere civilians.”

Regarding the submarine, the authorities should make clear what actions the warship may take to serve its purpose on deep-sea resources, such as by surveying for potential energy in maritime economic zones, he said.

On regional security, he said, the authorities could provide some tangible reasons, apart from a mere strategic maritime balance. For instance, they could make use of military joint practices as an opportunity for technology exchanges and regional cooperation to protect international waters. While analysts saw the need for a submarine, Surachart Bamrungsuk, security expert at Chulalongkorn University, was quoted by local media as saying the factors of timing, the number of submarines, price, quality as well as the suitability to the strategic areas and missions for their operations must be clarified by the Navy.

This clarity is required because the purchase will require a lot of budget and the procurement will create debt to the country for over 10 years which all Thais must shoulder, he was quoted as saying by Krungthep Turakit, The Nation’s sister newspaper last week.

Defence spending has tripled in Thailand over the last decade, a period during which the military has seized power twice.

“As the military has the final say on budgeting, there should be no surprise that we should see the junta seeking more ‘toys for the boys’,” said Paul Chambers, a expert on the Thai military, said

“This is a contributing factor to Thailand's current economic morass,” he told AFP, adding that the junta tried to keep the deal quiet because of its unpopularity.

“There is not a threat signal yet, but one day we could face some threats such as underwater mines. And our maritime forces have been decommissioned since 1951,” the spokesperson said.

He was referring to the year Thailand discharged the four submarines it bought from Japan in 1937.

“We have to be ready to cope with increasingly advanced technology. We can’t be reckless,” he added.