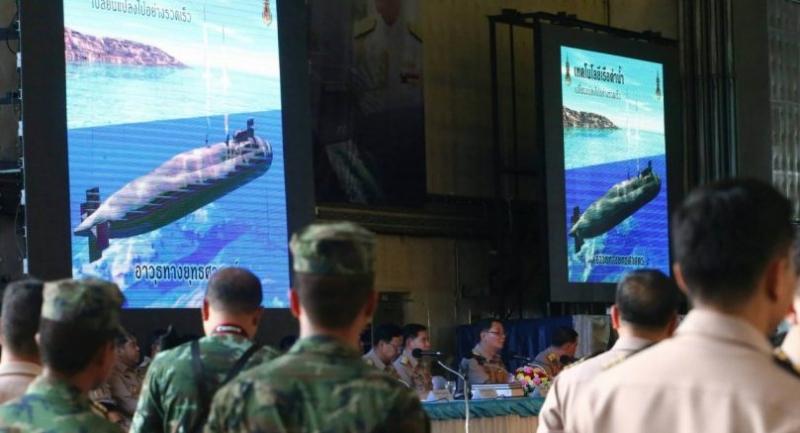 THE Royal Thai Navy admitted yesterday that the deal to buy three Chinese submarines could cost more than Bt36 billion – the initial price given by the government – if the Navy believes it requires more advanced technology.

“There might be additional costs if they enhance the capability of submarines in the future,” Navy Deputy Chief of Staff Vice Admiral Patchara Pumpiched said.

“But we’ll also make sure that all equipment that we request in the agreement is obtained.

“I don’t think any Defence Ministry or the Navy of any country would get a deal like we have,” Patchara added, suggesting the price was a bargain for Thailand.

The vice admiral, together with four other high-ranking officers, spoke at a press briefing to explain why the Navy gave thumbs up to the Yuan Class S26T submarines.

During the 90-minute press conference, the Navy stressed that the multi-billion-baht deal was “very cheap” considering additional services offered by the Chinese government.

Procurement of the first submarine, worth Bt13.5 billion, was confidentially approved by the Cabinet on April 18. The decision was widely criticised for its secrecy and lack of explanation about why the country needs to buy submarines, especially during an economic downturn.

Navy Chief of Staff Admiral Luechai Ruddit, who heads the procurement division, said the price would also include officer training from the Chinese Navy and supporting facilities such as a radio station, air compressor and capacitor.

The first hardware will be obtained within six years. Thailand and China expect to sign a procurement agreement this month, with the Kingdom having to pay a first instalment within 45 days of the signing, according to Rear Admiral Grisdaporn Bhundhoombhoad, director-general to the Naval Acquisition Management Office.

There will be 17 instalments for the first sub, Grisdapron said. Bt700 million will be paid this year and approximately Bt2.1 billion paid in annual sums from 2018 to 2023.

While Cabinet approved the Naval strategy to obtain all three submarines within the next 11 years, the Navy has yet to spell out when the second and the third subs will be purchased. “We’ll have to consider necessity and budget at the time,” Grisdaporn said.

Last October, the Navy set up a 22-member committee, mostly high-ranking officers, to work on the submarine procurement, including choosing which of six countries provided the best deal, Admiral Luechai said.

“They went through serious discussion to come to the China deal. There was no voting involved,” he said. “But I don’t think their names will be publicised, as that would only cause ripples of conflict and misunderstanding,” he said.

The Navy officials said they were not meant to provide any official explanation before the Cabinet gave the green light for it, reasoning the deal was confidential. However, the secrecy triggered public suspicion that the submarine purchase was part of a hidden agenda and that was why it went ahead secretly.

“We simply couldn’t say anything if the procurement process had not been completed. Revealing it too early would only harm other countries [that offered subs],” Luechai said. “It was also deemed confidential by the government.”