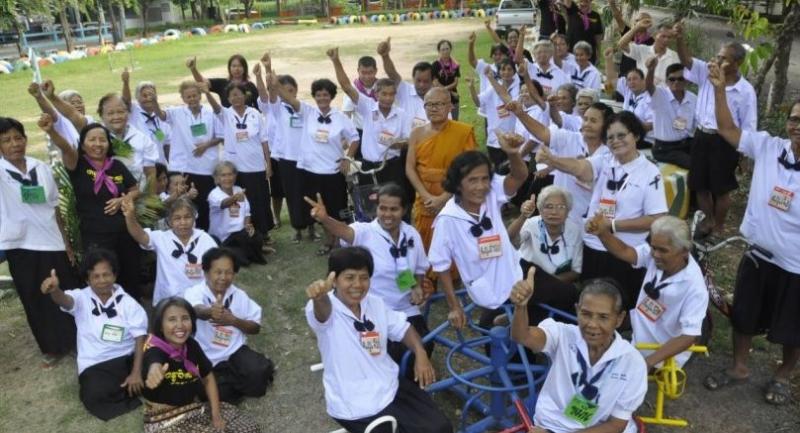 A TEMPLE abbot in Pak Thong Chai in Nakhon Ratchasima has hosted a project for elderly people to engage in Dhamma, as well as fun activities to promote their physical and mental health.

The move was an idea of Abbot Phra Kru Soponparsitthikhun.

As a gimmick for the school’s re-opening following the April break, the elderly wore student uniforms and joined fellow schoolmates at the playground of Wat Moung School before class teacher Tuanjai Pansanoi had them introduce themselves.

They also joined games to “break the ice” such as a contest of ping-pong ball transfer with spoons and a balloon-blowing contest.

Some “students” had to spit out betel nut juice to join this lung exercising activity, which made their colleagues laugh.

Normal activities on Buddhist holidays at the temple weren’t enough to meet seniors’ needs. So, he established the “Sil Ha Charasuk School” to get them engaged in vocational training, games and prayer.

The school has opened every Sunday since February from 8am to 4pm and is due to run till August. After closing for a break in April, it re-opened on Tuesday, he said.

Somjai Choomsanoi, 75, said attending the school and having fun with fellow seniors was better than staying at home alone and feeling lonely, while their children went to work and grandchildren went to school.