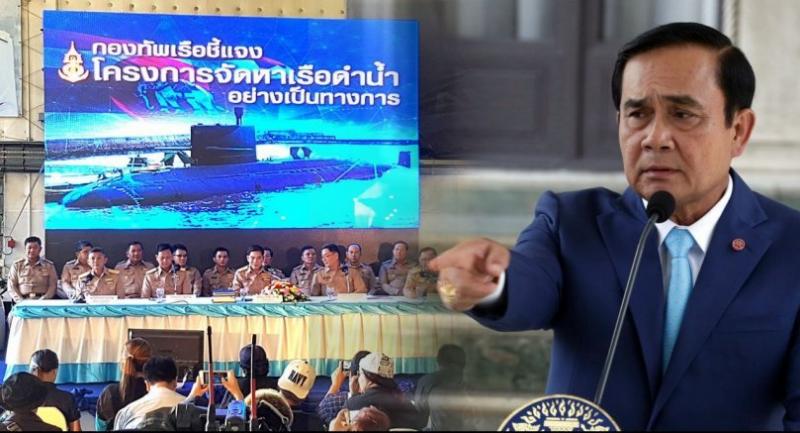 PRIME MINISTER General Prayut Chan-o-cha yesterday said that a press briefing by the Royal Thai Navy on the controversial submarine purchase, which has been publicly criticised for being too expensive, might have been “too open” as information on national security should be kept confidential.

“No other country reveals their military hardware this much. Their qualifications shouldn’t be brought into the open air,” Prayut said after a Cabinet meeting.

The premier spoke a day after the Navy held a two-and-a-half-hour press conference explaining the reasoning behind the Bt36-billion deal for three Yuan Class S26T submarines from China.

The session was held two weeks after the Cabinet confidentially approved a purchase proposal for the first Chinese submarine worth Bt13.5 billion. The deal, which is expected to be signed this month, would bind the Thai government to 17 instalment payments over at least seven years.

The secret approval was met by public fury, with critics saying that Thailand did not need expensive submarines as the economy languishes, especially as the Kingdom does not face any major maritime threats.

To resolve public doubts, five high-ranking Navy officers on Monday went into detail about the technical advantages of the Chinese submarines over those from other countries, what the Chinese package would include, and the overall payment process.

However, Prayut said the procurement had proceeded appropriately and should not have required such an elaborate public explanation.

“[The public] shouldn’t simply assume the submarine to be of poor quality. We want it to boost our maritime capability,” the premier said. “The procurement process went through thorough consideration to make sure that [the submarines] will not fall below standards.”

Prayut also rejected politicians’ suggestion that the money should have been spent on other national priorities. “Everything can’t simply be solved by money, it has to be fixed at a structural level,” he said. “Domestic security is also important.”

He also claimed that the Office of Auditor-General and the Office of the National Anti-Corruption Commission had already reviewed the procurement process and given suggestions at almost every step of the way.

However, Auditor-General Pisit Leelavachiropas has said that his office planned to review the Cabinet’s approval and assign senior officers to investigate the Navy, given that the deal was highly confidential and could not be exposed to public scrutiny.

Srisuwan Janya, secretary-general of the Association to Protect the Thai Constitution, has urged Prayut to exercise his authority under Article 44 of the interim charter to set up an independent body to investigate the Navy’s plan to buy the submarines.

He said the investigatory committee should consist of impartial representatives from the judiciary and academia to ensure the plan was transparent and legal. The government has not yet fully disclosed information on the acquisition scheme, including the bidding terms of reference and payment plan.

The Navy has said it would pay for the first submarine in instalments over a seven-year period while Deputy Prime Minister and Defence Minister Prawit Wongsuwan said the government would use the state budget to pay over an 11-year period.

Srisuwan also accused Prawit of misleading the public by saying that Thailand would get three submarines for the price of two, adding that Prayut should consider setting up an independent body to provide factual information to the public.