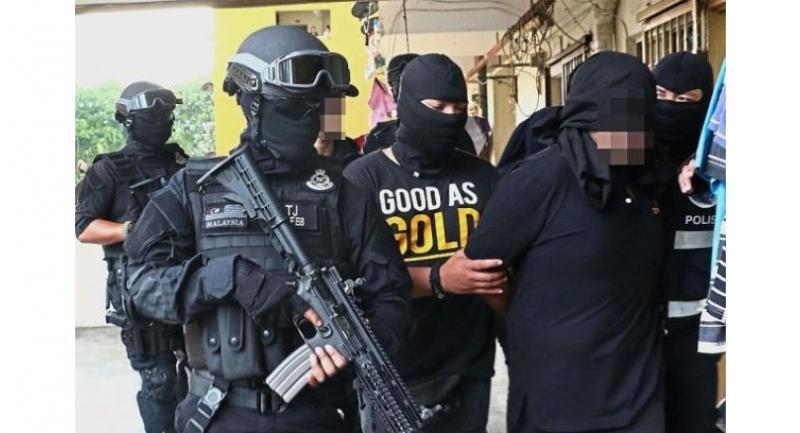 Pulling ’em in: (From top to bottom) Officers from the Bukit Aman Counter Terrorism Division arresting a 41-year-old man in Penang, a 32-year-old factory technician in Johor and a 26-year-old student at the KL International Airport.

An Islamic State (IS) terror cell in Malaysia has been smuggling weapons in from southern Thailand and stockpiling them for about a year to prepare for attacks on home soil and abroad.

The cell, based in Kelantan, was exposed when police arrested six people in a nationwide swoop.

“The authorities believe they have been smuggling weapons for at least a year but it could have been longer than that,” a source told The Star yesterday.

Two members of the terror cell, were arrested in Kelantan on March 24 and March 25 while another managed to escape to Golok.

Four other IS militants were detained in Malacca, Penang, Johor and Selangor in a major swoop by the Bukit Aman Counter Terrorism Division between March 24 and April 25.

The arrest by the Malaysian police is just one example of how the Islamic State’s presence has grown across the region in the past three years.

A December 14 article by Ong Weichong in the Diplomat speculated that as IS loses ground in the Middle East, it may look to re-establish its base elsewhere – particularly “grey zones” in Southeast Asia with limited government control like the island of Sulawesi in the Philippines.

Southern Thaialnd, home to a separatist Muslim insurgency, has also been cited as a potential hotspot as well as Sabah in northern Malaysia.

IS could be expanding its targets as well, according to reports. Major financial centres like Hong Kong and Singapore could also be at risk, which are home to a number of  international institutions and large communities of foreigners.

Hong Kong police warned on Wednesday that the city could be the victim of a “lone-wolf” attack by an IS-affiliated group, according to the South China Morning Post. While police did not identify any specific threats to the city, its vast transit system and connectivity could make it easy for a potential attack.