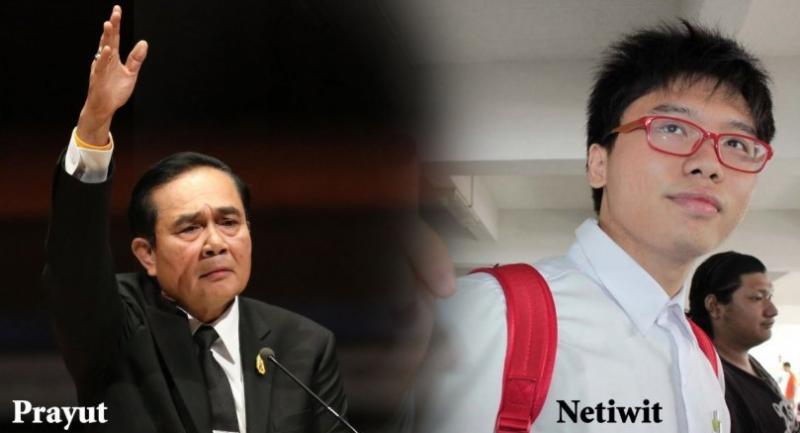 STUDENT ACTIVIST Netiwit Chotiphatphaisal was admonished by the prime minister yesterday over his plan to campaign for Chulalongkorn University students to be given the choice on whether they should lie prostrate before the statue of King Chulalongkorn at an annual ceremony.

“I feel pity and have concern. This could tarnish the reputation of the institution,” Prime Minister Prayut Chan-o-cha Prayut said yesterday.

Good traditions, he said, need to be preserved, as they were “charms” of the country.

“Don’t abandon your past while you move forward. We should be proud of our good history and it should be preserved. We may not repeat the bad ones,” Prayut said.

His remarks came in a keynote speech at Mahidol University on the roles of Thai universities.

In response, Netiwit asked in a Facebook post yesterday: “Who is the nation’s embarrassment?” The activist said that in the eyes of young people like him, Prayut had tainted the country’s reputation for more than three years after staging the 2014 coup and restricting human rights.

“He should respect the rules of the country. If he has political ambitions, he should form a political party,” Netiwit wrote. “By staging the coup, he did not abide by the rules.”

After being elected the new president of the Student Council of Chulalongkorn University (SCCU), Netiwit said he planned to campaign for reform in the university’s hazing and seek permission to allow students to choose whether to lie prostrate or bow before King Chulalongkorn’s statue.

The university holds a ceremony to pay homage to the revered King before his statue at the Royal Plaza every year on King Chulalongkorn Day on October 23.

Netiwit, 20, who portrays himself as a progressive, has been known for his political activism and iconoclastic views since he was a high-school student. His enrolment in the conservative university’s Political Science Faculty last year surprised many people.

His election as SCCU president has drawn mixed reactions from the student council. While some members extended congratulations and said they looked forward to a “new Chula”, others expressed concern that he might taint the university’s reputation.

Last year, Netiwit declined to lie prostrate before the monuments of the university’s founders, Kings Chulalongkorn and Vajiravudh (Rama V and Rama VI). He chose instead to remain standing during a traditional oath-taking ceremony for first-year students, sparking controversy among students, alumni and outside observers.

He has also stirred controversy by voicing strong opposition to hazing traditions during freshmen orientation week. To mark the 40th anniversary of the student-led October 1976 pro-democracy uprising last year, Netiwit invited Hong Kong activist Joshua Wong to speak. Wong was deported less than 24 hours after arriving at Suvarnabhumi Airport, but Netiwit managed to have Wong speak to the event via Skype.