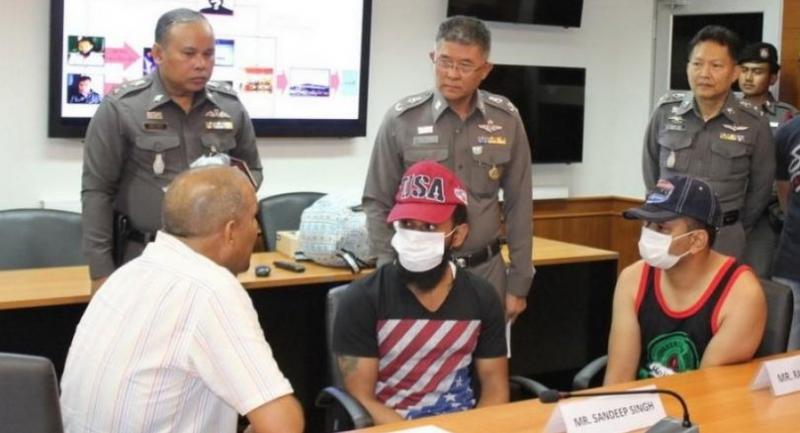 “The two suspects are Raj Kumar, 36, and Sandeep Singh, 30. They were first arrested at 5pm Saturday, but managed to escape from Saku Police Station,” said Gen Teerapol.

After receiving reports that they had taken a taxi to Patong, officers coordinated with Patong Police to begin a manhunt. The suspects were recaptured at 11pm the same day.

“Both confessed that they were Indian by birth and wished to work in Canada, but were afraid of visa rejection. They contacted an agent in Phuket who promised to provide them with fake passports and accommodation. They initially entered Thailand in March at Suvarnabhumi International Airport using their real passports,” added Gen Teerapol.

After obtaining fake Portuguese passports in Thailand, they went to Malaysia (using their real passports), but returned to Thailand in April at the Satun border where they used the fake (Portuguese) ones. They then came to Phuket and stayed at a hotel in Patong.

On May 19, they boarded a flight to Canada at Phuket International Airport with a transit in South Korea. However, South Korean immigration officials denied them onward boarding and the two were rerouted back to Phuket.

“South Korean authorities did not specify the exact reason that the men were refused entry,” said Col Supachok Yongstar of Phuket Immigration Office.

Gen Teerapol said the agent for the fake passports is believed to be a foreigner, but officials have yet to identify or track him down.

“The suspects told us that they had spent more than a million baht each on the entire process, including accommodation and flights to Malaysia and Canada. We are examining the seal on the fake passports to compare it with the original,” said Gen Teerapol.

“It is perplexing that Thai immigration allowed them to pass through. According to CCTV footage at the airport, the passports were scanned as per the usual procedure, but nothing suspicious was detected,” he added.

Col Supachok admitted that, paradoxically, it was becoming more and more difficult to detect fake passports nowadays as the technology had become more advanced. He said that this was a model case for officers to follow in order to avoid repeating the same mistake(s).

Both suspects were charged with possession and use of a forged passport and taken to Saku Police Station for further legal processing.