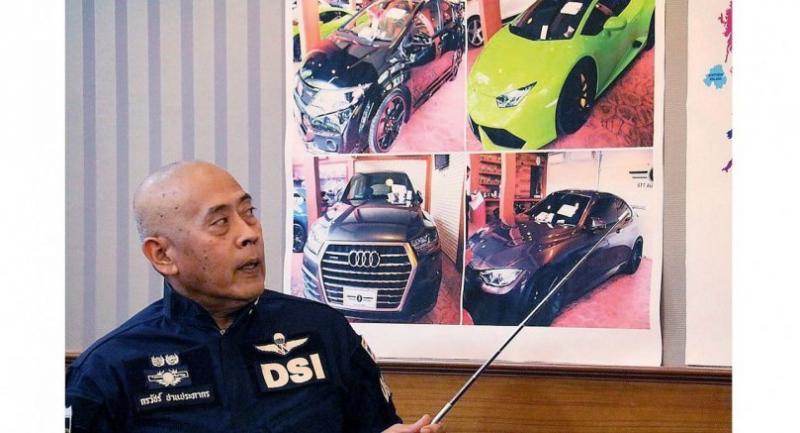 MORE THAN 40 luxury cars have been stolen from Britain and sent to Thailand, according to Thai and British authorities.

Of them, at least three have already been sold to buyers who may not know about the illegal background of the dream cars.

“By now, we have found that three of the stolen cars have already been sold,” DSI deputy chief Pol Lt-Colonel Korrawat Panprapakorn said yesterday. He said they were two BMW M4s and one Porsche Cayenne.

He said six other stolen cars had already been impounded from suspected wrongdoers by authorities. One stolen Porsche Boxster was still parked in the Customs Department’s Duty-Free Zone.

“We will try to locate the rest,” he said.

British authorities told the DSI that the luxury cars were bought through car loans, with buyers paying just a few instalments before shipping the cars to Thailand and lodging a car-theft complaint in the UK to claim insurance compensations, Korrawat said.

The DSI and the Customs Department have now joined forces in investigating allegations of import-duty evasion by car importers and dealers going back five years.

Raids at nine locations on May 18 resulted in the seizure of 122 luxury vehicles from Niche Car Group showrooms. On May 24, 38 luxury cars were confiscated after raids at six locations.

As the vehicle importers allegedly quoted much lower prices, it was estimated that the cars – including brands such as Lamborghini, Rolls-Royce, Aston Martin and Ferrari – evaded the high customs duty of 300 per cent which could mean the country suffered Bt3 billion in lost revenue.

Investigators were still gathering evidence and related documents seized from the importers and dealers to determine if the cars evaded tax.

Paisit said the lengthy investigation stemmed from an incident in 2013 when luxury cars caught fire during transportation in Nakhon Ratchasima’s Kalng Dong district.

He said the DSI and Customs would work together to determine the unpaid tax amount, the criminal prosecutions that might be involved and the legal proceeding.

Customs Department Director-General Kulis Sombatsiri said that the two agencies would join forces to look at car imports to Thailand over the past five years that may be involved in tax evasion and vehicle theft.

Korrawat said the DSI had |not determined if any of the importers and dealers had broken the law but would proceed with legal actions against those deemed law violators.

Asked why Customs released cars with so-low declared prices out, Kulis said the agency would generally believe and accept the prices as stated in the submitted invoices from importers.

He also admitted that some Customs officials were being investigated by the Office of the National Anti-Corruption Commission, the result of which would released in September.Kulis said the new Customs Act which was due to come into effect in November, would be helpful in preventing such crime. It would allow goods passing through Thailand to be held for 30 days before going on to a destination country or being taken out and taxed for sale in Thailand – or else it would be confiscated as the country’s assets.