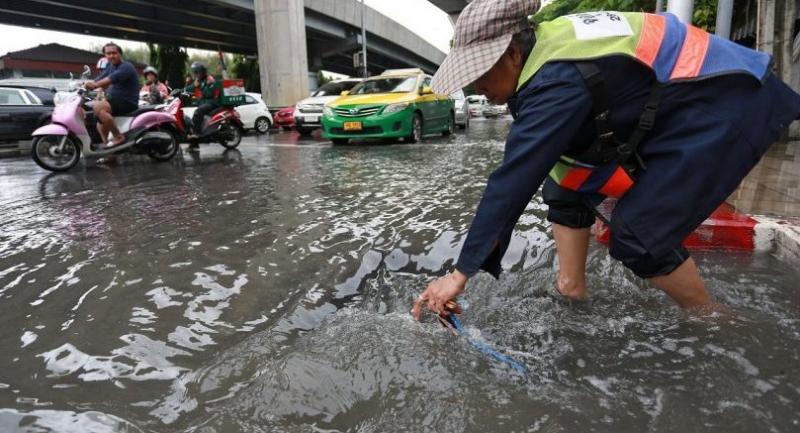 Rainy spell ‘likely to ease from today’; many rice plantations under water.

AFTER DAYS of heavy rains across all regions of the country, meteorologists have some good news for those who have been suffered from the downpours: most of Thailand will see decreased rainfall over the coming week.

Meanwhile, the Royal Irrigation Department yesterday ruled out the possibility of a severe flooding crisis similar to 2011.

Thongplew Kongjun, the department’s deputy director-general, said the rainfall volume this year was much lower than in 2011 and that there was still a lot of capacity in dams, reservoirs and lakes throughout the country. As of yesterday, no reservoirs had water supply above 80 per cent of capacity, compared to near-capacity levels at almost all dams in 2011.

The Meteorological Depart-ment forecast yesterday that rainfall would decrease in most areas of the country, except in the northern and upper northeastern provinces, from today until June 5.

In its latest statement yesterday, the agency warned of dangers from heavy and cumulative rains, including flash floods in foothills and low-lying areas.

Influenced by Cyclone Mora that covered upper parts of the Bay of Bengal, downpours yesterday hit several areas of Thailand, including the capital which was badly soaked. Provinces in all regions covering more than half of the country were hit by “heavy to very heavy rains”.

However, the Meteorological Department forecast lighter rains from today until next Monday, as the southwest monsoon was becoming weaker during the period. Bangkok and adjacent provinces were forecast to see thundershowers over 40 to 60 per cent of the areas between today and Sunday, compared to 60 to 80 per cent on Monday and yesterday, according to the agency.

Residents of the city suffered from flooding in many areas yesterday, as new rains added to floodwaters from previous days waiting to be released into the drain system. The affected areas included Lat Phrao, Bang Sue, Asok, Chatuchak, Chaeng Wattana and Bang Khen.

Certain areas of the capital’s satellite provinces, including Nonthaburi, Pathum Thani and Samut Prakan, were also under water yesterday.

Flooding in many areas was mainly blamed on large amounts of garbage and waste that clogged antiquated sewers.

He said four districts of the Central Plains province had been heavily affected – Muang, Bang Pla Ma, Song Phi Nong, and U Thong.

The senior provincial official said local authorities were helping the affected farmers by attempting to drain water from their plantations. However, large areas remained inaccessible, even for heavy machinery, due to high levels of floodwater.

“Assistance could not be brought in due to a sea of floodwater there. We will provide the residents with help whenever we can,” he added.

He said yesterday that due to heavy rains over the past month that came early this year, higher-than-expected amounts of water – 386 million cubic metres – have entered the Ubol Ratana Dam in Khon Kaen, a major reservoir in the Northeast.

With the Meteorological Department forecast of heavy rains in the Northeast over the next week, he said his office was preparing for possible flooding. More water pumps would be installed, canals and reservoirs dredged and weeds removed from waterways as part of the preparation, he added. The Khon Kaen office of the Royal Irrigation Department would be on alert around the clock during heavy rains and when under a crisis situation, the official said.