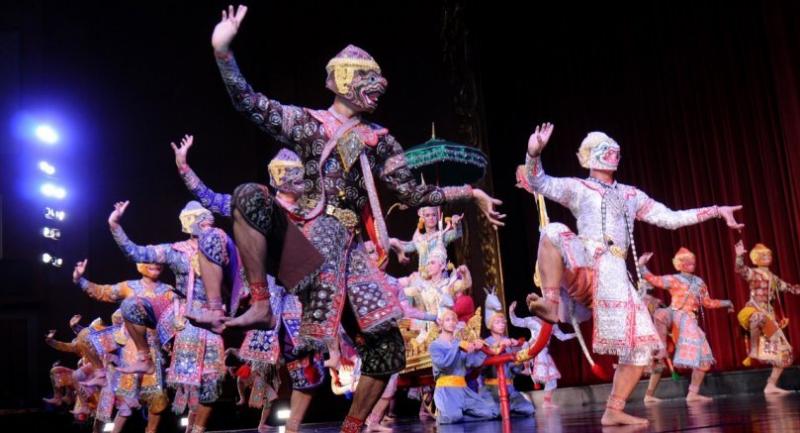 About 1,000 artists will take part in traditional performances in front of His Majesty the late King Bhumibol Adulyadej’s crematorium on Royal cremation day.

Culture Minister Veera Rojpojanarat told a press conference on Wednesday that all the characters, casts and details were complete and the artists have started rehearsing to give their best performances at the historic event.

His Majesty the late King’s Royal cremation will take place on October 26 in the Sanam Luang ceremonial ground. There will be three stages for performances on the North side from 6pm on cremation day until 6am the next day, said Fine Arts Department chief Anan Chuchote.

The first stage will present a shadow puppet show and a Khon performance about the Hindu epic Ramayana by artists from the Office of Performing Arts, along with teachers and students from 12 Colleges of Dramatic Arts as well as the Bunditphatthanasilpa Institute.

There will also be Khon performances from Ramayana epic’s various chapters, organised by the Foundation of the Promotion of Supplementary Occupations and Related Techniques under royal patronage, he added.

The second stage will present royal puppet shows from chapters in the Phra Mahachanok story, the Ramayana epic and the Phra Apaimanee story, as well as the “gold and silver flower” Thai classical dance, the classical court drama (Lakhon Nai) a story of Inao, a legendary prince in Indonesia’s East Java, and a staged play about a supernatural kinnari (half-bird and half-human) princess called Manora.

The third stage will present a classical music concert titled “Tha Keu Doungjai Thai Tua La” (His Majesty is in the hearts of all Thais of the land) featuring the music of His Majesty the late King Bhumibol as well as songs written to honour him, Anan said.

As well, a special Khon performance of the Ramayana epic’s chapter in which Phra Ram crosses over the ocean, will be held at the ceremonial ground in front of the Songtham pavilion and the Royal crematorium as tribute to the late King’s great merits to the country, he added.