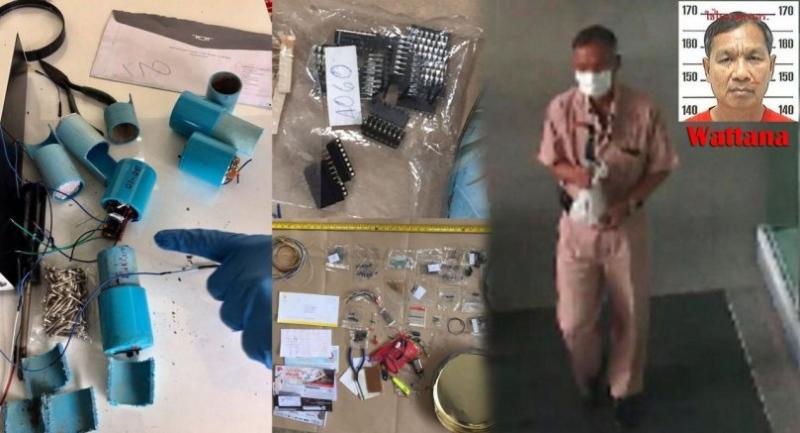 A RETIRED electrical engineer has admitted that he was responsible for three bomb explosions in Bangkok earlier this year and three more in 2007 “because he disliked the military”, authorities said yesterday.

National police chief Pol General Chakthip Chaijinda said he was “rather confident” the right culprit had been arrested. “We have sufficient evidence to prosecute him,” he said.

The suspect was identified as Wattana Pummares, 61, who previously worked for the Electricity Generating Authority of Thailand as an engineer. He was arrested on Wednesday and detained by the military.

Wattana, his wife, and another woman close to him, have been detained at different military facilities in Bangkok. Due to a post-coup rule, the military has the power to detain suspects in security-related offences for up to seven days.

When asked if the suspect’s alleged attacks were politically motivated, Chakthip said details would be disclosed at a police press briefing which would be held after the military hands the suspect over to police, which he expected to take place no later than next Tuesday.

“Police are trying to find out if other people were involved. Wattana gave useful information. But I don’t want to say now whom he has mentioned,” Chakthip said.

He added that the suspect had confessed that he planted a home-made bomb at Phramongkutklao Hospital last month, which left 25 people injured, and he also admitted to being responsible for a number of other explosions.

The Criminal Court yesterday approved a warrant for Wattana’s arrest for possessing explosive devices and his involvement with four bomb explosions in the city – one in 2007 and three others in April and May this year, deputy national police chief Pol General Srivara Ransibhramanakul said.

Deputy Prime Minister and Defence Minister Prawit Wongsuwan yesterday said Wattana “did it absolutely” because he disliked the military.

When asked if the suspect was involved with hard-line fugitive red-shirt leader Wuthipong “Ko Tee” Kotchathammakhun, General Prawit said authorities were looking into that matter. Wattana told investigators that he planted improvised explosive devices in the capital because he wanted to take revenge on the military for its deadly crackdown on red-shirt protesters in 2010, according to a source.

His confession came after more than two hours of interrogation on Thursday, the source said.

In September 2006, the military staged a coup to overthrow the government of Thaksin Shinawatra.

The retired engineer also confessed to being responsible for three bomb blasts in the capital this year – outside the old Government Lottery Office building on Rajdamnoen Avenue on April 5, in front of the National Theatre on May 15, and at Phramongkutklao Hospital on May 22.

However, military investigators were not convinced by the suspect’s claim that he carried out all the bomb attacks alone, according to the source, who added that it was likely more blasts would have occurred soon if the man had not been arrested. Four home-made bombs were found in his house during a recent search, the source said.

Tests of the suspect’s DNA matched those found on all the explosive devices except for one – the improvised bomb planted outside the old GLO building, according to the source. That was why investigators were convinced the suspect did not act alone, the source added.

“The investigators believe there must be other people who helped the suspect carry out the attacks,” the source said.

Meanwhile, former prime minister Yingluck Shinawatra yesterday dismissed speculation that her elder brother Thaksin, who has lived in self-exile overseas since 2008, was linked to the suspect, after a wall clock with Thaksin’s image was found at the suspect’s house.

Yingluck said that it was normal for a former prime minister to have admirers. But she maintained that Thaksin would not encourage the use of violence by his supporters.

“I believe that he [Thaksin] has never supported use of violence. Also, the Pheu Thai Party already condemned those responsible for such acts [planting bombs],” she said.

Yingluck was speaking to reporters after arriving at the Supreme Court’s Criminal Division for Political Office Holders, to attend a hearing on accusations that she was negligent in connection with her government’s corruption-plagued rice pledging scheme.