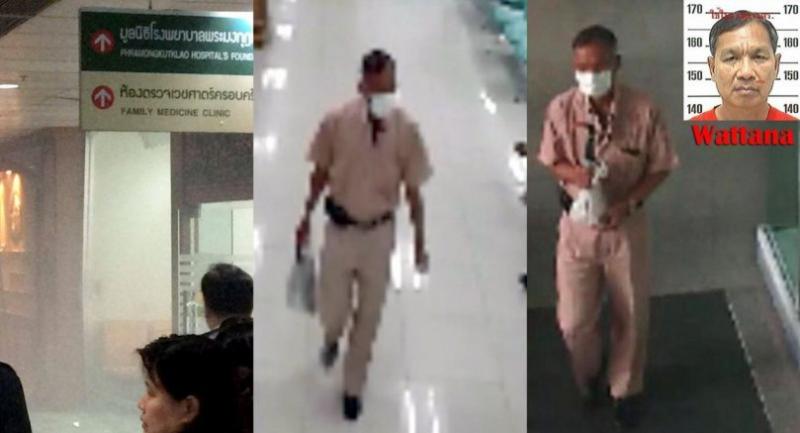 MORE THAN three weeks after the explosion at the military-run Phramongkutklao Hospital on May 22, authorities have finally arrested someone they believe to be the culprit.

Retired electrical engineer Wattana Pummares, 61, was held by a team of police and military officers on Wednesday evening. He was later interrogated as a suspect and detained at a military unit.

A search at his house the following morning in Bangkok’s Bang Khen district found four improvised explosive devices, integrated-circuit timers, and other materials that could be used in bomb making, according to a security source.

The suspect lived with his wife, who is a former military officer, their two sons and a daughter-in-law at the house.

The suspect was traced from security-camera recordings from the hospital. On May 22, the third anniversary of the 2014 military coup, Wattana was seen loitering in the area after the explosion.

He stood out among the persons of interest after he was found to have taken a bus from the hospital to the Victory Monument and then went up and down the nearby Skytrain station stairs repeatedly for more than two hours.

Investigators later found that the suspect took bus number 18 to Bang Kruai area of Nonthaburi before putting something inside a car at a parking area near the Electricity Generating Authority of Thailand. They managed to get his identity from the vehicle’s registration.

Investigators spent more than a week following and monitoring the suspect, but they found nothing suspicious with his daily movements. He mainly commuted between his house and a condominium in Nonthaburi’s Bang Kruai area belonging to a woman close to him.

However, investigators learned from someone who knows him that he participated in political protests and was still politically active with the same group, according to the source.