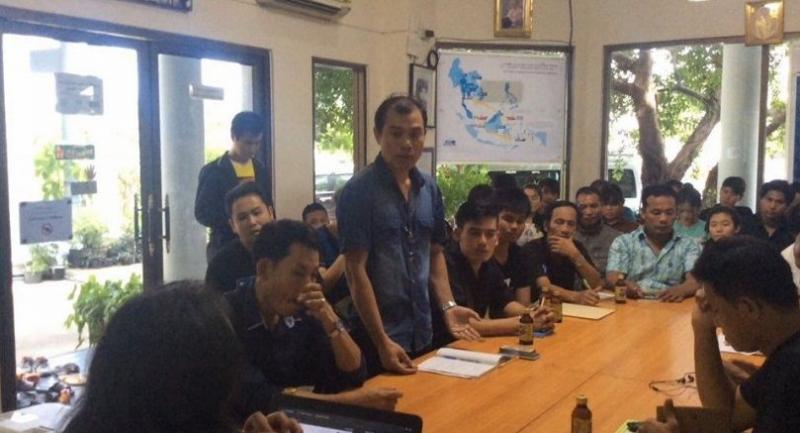 A LABOUR rights advocacy group has urged the government to adopt additional measures to help legalise an estimated 2 million migrant workers in Thailand in the wake of the new foreign labour law.

Sompong Srakaew, director of the Labour Rights Promotion Network, said migrant workers had valid passports but their jobs did not correspond to those specified in their work permits, or they had switched to new employers, and they should be helped to comply with the new law. Thailand has a total of about 5 million migrant workers, but only 1.3 million have proper documents and fully meet the new legal requirements. The rest include those who have valid passports but have already changed jobs or employers, as well as those who do not have any documents but work illegally in Thailand.

Sompong said he would discuss the issue with the Ministry of Labour on Wednesday and urge the government to introduce additional measures to help those who already had some kind of document to work in the Kingdom.

Some migrant workers were worried that they would be arrested, even though they do have documents, Sompong said. In many cases, labour recruitment agencies or employers take away workers’ documents, so it was not possible to verify the identity of work permit holders against their actual jobs. In addition, many factories do not want to hire migrant workers directly, so they turn to labour subcontractors who may not be transparent in terms of meeting legal requirements.

“If the government does not take precautionary measures, the country will face a labour crisis again similar to what happened back in 2014. The number of migrant workers with passports or pink-coloured cards is estimated to be 2.6 million. The rest are regarded as underground migrant workers, and their exact number is not known. “A new crisis will hit every sector of the Thai economy. For example, major construction projects will be halted since most labourers are migrants hired via subcontractors,” Sompong said.

Even though enforcement of the new foreign labour law was suspended for a 120-day period starting on June 23, tens of thousands of migrant workers from Cambodia and Myanmar have left the country due to the heavy penalties stipulated in the law. In Tak province bordering Myanmar, more than 30,000 migrant workers have already returned to their home country over the past three days, while several thousands of Cambodians have also left.

According to labour rights advocacy groups, there should be additional measures to complement the new labour law. The first measure would be to require all migrant workers to keep their own passports and work permits. Second, they should be allowed to change jobs or employers legally. Third, the government should hire private contractors to do registration work for a faster service, instead of using its budget on law enforcement. Fourth, the expenses for proper documents and registration should be lowered from the current Bt20,000 to Bt30,000 per person.

Meanwhile, Aung San Suu Kyi, Myanmar’s foreign minister, has told supporters she would negotiate with the Thai government to help solve problems resulting from the new foreign labour law because thousands of Myanmar migrant workers had lost their jobs.

In a related development, immigration authorities near the Thai-Cambodian border have stepped up their inspections of Cambodians wanting to enter Thailand to tackle human trafficking problems in which undocumented migrants are abused by criminal networks. However, Surawud Wongsamran, director of Sa Kaew province’s chamber of commerce, said the new foreign labour law had hit logistics and other businesses, especially small and medium enterprises and agriculture.

Meanwhile, the national police chief has ordered police nationwide not to take bribes from illegal workers and their employers or risk stiff penalties.