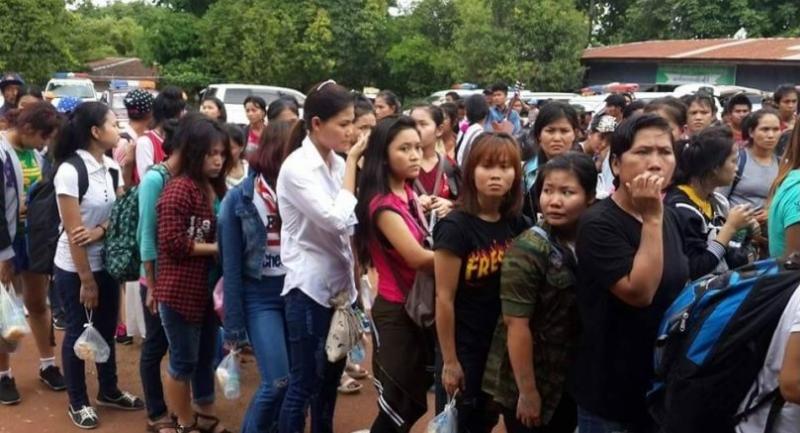 File photo :Myanmar workers line up at border province of Tak on their way to return home following the crackdown on undocumented workers in Thailand.

“Most of the teachers only have identification cards issued by the Thai Education Ministry. The police can arrest them if they don’t have residency documents,” he said.

“Some of the teachers are too afraid to come to school so we have to temporarily close the schools down.”

It was not immediately clear how many of the 69 Myanmar migrant schools at the Thai-Myanmar border have been closed, according to Karen News.

The Thai police launched the crackdown on June 22 after a new foreign labour law concerning migrant workers in Thailand was enacted on June 20.

Over 1,400 undocumented foreign workers – including over 1,000 Myanmar workers – have been arrested [as of June 29] so far, according to the Joint Action Committee for Burmese Affairs (JACBA)’s chairman U Moe Gyo.

“They started the crackdown two days after it was enacted [so] the Thai government has shamelessly violated human rights [principles],” Karen News quoted him as saying.

Although the police have not made any arrests at migrant schools, they are arresting migrant workers on the streets and in markets, according to officials from the BMTA.

BMTA officials said this also means that some undocumented Myanmar migrant parents are also not allowing their children to attend school.

But vice chair of the BMTA Mann Shwe Hnin remained optimistic, saying “I believe the situation won’t deteriorate since we have always [been able to negotiate].”