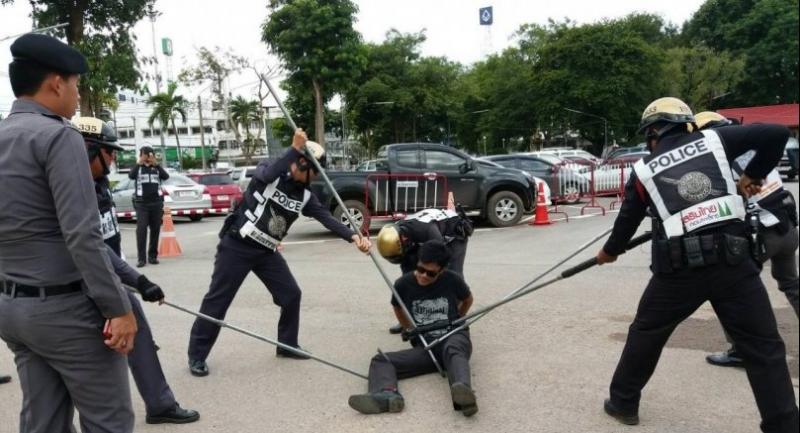 Muang Maha Sarakham police demonstrate how to use sticks to subdue a suspect on Tuesday.

By Anek Krajaem
The Nation

A video of Maha Sarakham police using Y-shaped and hooked sticks to subdue a frantic drunken man, which went viral on Monday, was part of a wider strategy, it was revealed.

He said that once a week since last year, each precinct under Provincial Police Region 4 has had a team of four officers trained in how to use three Y-shaped and one hook-shaped stick to subdue suspects.

The hook stick is used to pull a suspect off their feet and the Y-shaped sticks are used to hold them down.

Chairoj said the method is used only when deemed appropriate.

The incident in the video, which went viral after its was posted on the precinct's Facebook page, took place on Saturday after police were alerted to a drunken man wielding an object that looked like a long knife wrapped in a cloth at the Maha Sarakham Bus Station.

He was arrested for creating a public disturbance.