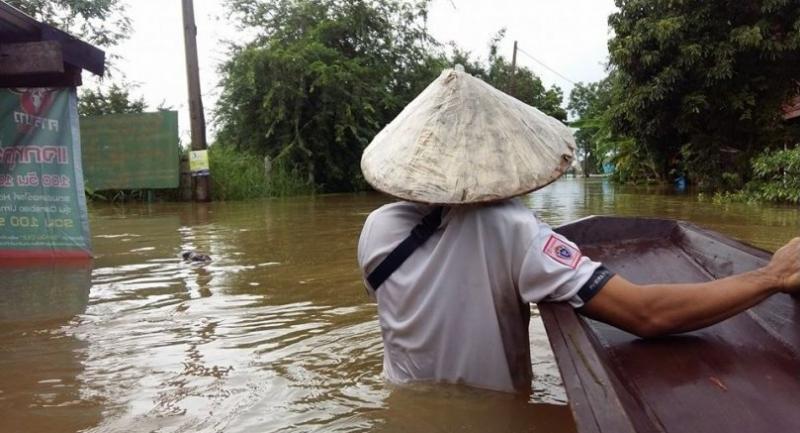 EVEN IN THE absence of more rain, it will take at least 10 days for floodwaters to drain from the heavily-inundated Sakon Nakhon province into the Mekong River through the neighbouring province of Nakhon Phanom.

Authorities estimated that the drainage would take about 11 days before the flood situation returned to normal, the National News Bureau of Thailand reported yesterday. However, that estimate was based on the condition there would not be more rain, which would result in increased floodwaters affecting the province from upriver areas, the report said.

Agriculture and Cooperatives Minister Chatchai Sarikalya, who yesterday inspected the flood situation in Sakon Nakhon, said the Royal Irrigation Department was installing 26 water pumps in an attempt to push floodwaters into the Mekong River.

“The goal is to release water into the Mekong River within seven days, unless there is more rain,” he said.

Eighteen provinces have been flooded as a result of the recent tropical storm Sonca – 12 in the Northeast, four in the North, and one each in the Central and South regions, Chatchai said.

Meanwhile, Prime Minister Prayut Chan-o-cha has dismissed allegations of mismanagement and a lack of government warning of severe flooding in the Northeast.

Prayut said he did not want the suffering of flood victims to be politicised in an effort to discredit the government, according to spokesman Lt-General Sansern Kaewkamnerd. He said state agencies had frequently issued weather warnings but that the severe flooding stemmed from a natural disaster, not government mismanagement.

He also invited members of the public to make cash donations for flood victims through a PM’s Office account with the state-run Krungthai Bank.

More powerful water pumps were being installed in the province to help with the operation, but hundreds of Nakhon Phanom residents were struggling with floods yesterday as run-off from Sakon Nakhon deluged the province.

Flooding in 18 districts of Sakon Nakhon – the hardest hit of provinces affected by the recent tropical storm – has caused anxiety and serious problems for residents, according to the provincial disaster prevention and mitigation office. The floods have left several communities marooned for the past three days, with victims facing shortages of food and water. The downtown area of Muang district has been hardest hit.