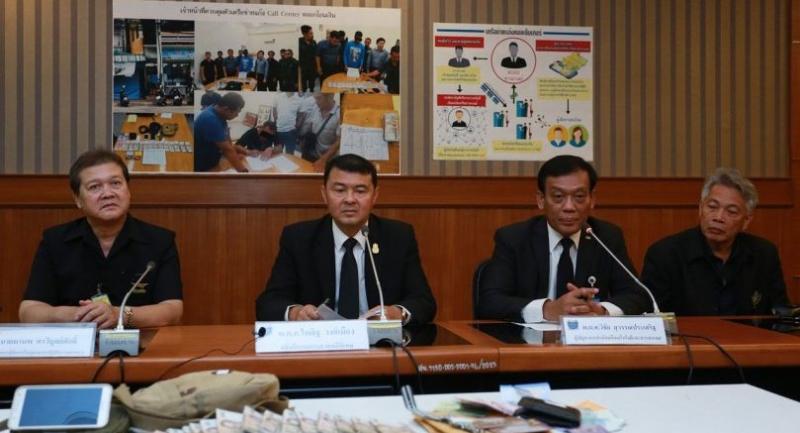 Two Malaysians have been arrested for allegedly operating a call-centre scam that cost its victims more than Bt5million.

The fake call centre was identified by officers of the Department of Special Investigation (DSI) and the Anti Money-Laundering Office.

Members of the gang allegedly told the people that their names were on parcels containing drugs, but they could avoid trouble by transferring money to a specified bank account

“We have gone after this gang after receiving a complaint from a victim who lost Bt1.3million,” DSI chief Pol Colonel Paisit Wongmuang said on Wednesday.

Investigations revealed that this same gang had also swindled several other victims, taking a total of more than Bt5million.

Officials finally arrested suspects Saravanan Mutnusam and Tan Eng Keon in Songkhla province while they were about to withdraw cash.

“We have then successfully confiscated Bt500,000 that will be returned to victims,” Paisit said.

“Malaysian men married Thai women and instructed their wives to hire others to open bank accounts for their use,” Wichai said.

One of the victims said the gang told him that his name appeared as the person who sent a parcel containing drugs from Chiang Rai province to the South.

“I was told the recipient had already been arrested and I was implicated,” the victim said. “In the midst of confusion, I was persuaded to transfer money to a bank account.

“I did so out of the belief that I would get my money back later. When I could not get it back, I alerted the DSI.”

Wichai said people should keep in mind that government agencies would never contact people by phone.

According to Thailand Post, 2,109 people had been lured into transferring money to have parcels delivered between February and July.

“Thailand Post has no policy to demand money transfers for the delivery of parcels. If we cannot send the parcels, we will leave parcel notification slips for recipients,” he said.