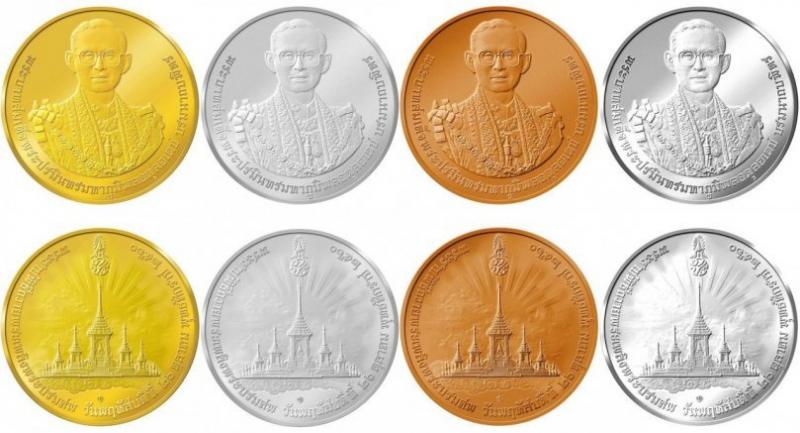 Commemorative coins minted for the funeral of His Majesty the late King Bhumibol Adulyadej will soon be available.

The Finance Ministry’s Treasury Department will be accepting reservations to purchase the gold, silver, bronze and cupronickel coins from Tuesday (August 22) through September 30.

Net proceeds after expenses will be presented to His Majesty King Maha Vajiralongkorn.

A portrait of the late monarch in court regalia appears on one side of the coins along with his name in Thai. On the reverse are a depiction of the crematorium being erected at Sanam Luang, the Royal Cypher of King Rama IX, and the inscription in Thai, “The royal funeral ceremony on Thursday October 26, BE 2560”.

Treasury Department chief Patchara Anuntasilpa said his office, the Thai Bankers Association, the government’s financial institutions council and 19 banks would through September be taking public reservations to purchase the coins.

Individuals can reserve up to three coins.

All branches of the 19 participating banks would take reservations for the gold, silver and cupronickel coins, he said.

To reserve a Bt3,000 bronze coin, however, applicants must present their Thailand ID card at the department head office, any of its 76 branch offices, the Bureau of Monetary Management in Pathum Thani, the Coin Museum on Bangkok’s Chakrabongse Road, or the Treasury Pavilion Museum in Chiang Mai or Songkhla.

Patchara said the coins would be ready to pick up starting on January 29.