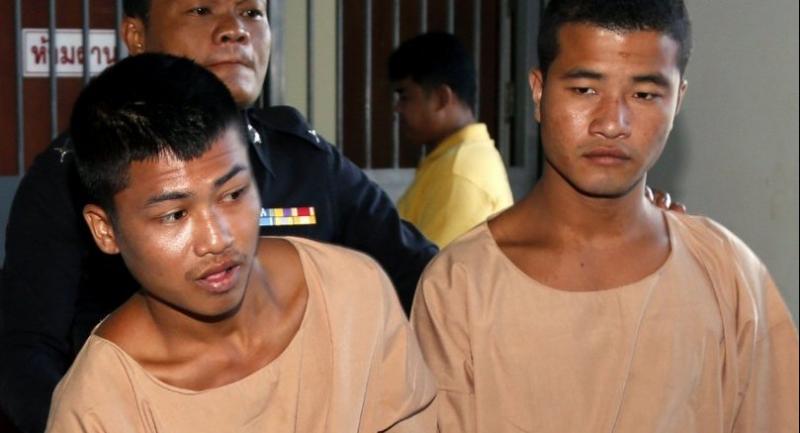 (FILE) - Myanmar migrant workers, who are accused of the killing of two British tourists, Zaw Lin (R) and Wai Phyo (L) are escorted by a Thai police officer after they were sentenced to death at the Samui Provincial Court. // EPA PHOTO

TWO MYANMAR nationals convicted of killing two British tourists in Koh Tao in 2014 have submitted their final appeal to the Supreme Court asking for a review of the judicial process and the evidence against them, according to their lawyers.

The two men, Zaw Lin and Win Zaw Htun, are seeking to overturn death sentences handed down to them by the lower court in December 2015 for the murder of British tourists Hannah Witheridge, 23, and David Miller, 24, in Surat Thani’s Koh Tao. The sentence was upheld by the Appeal Court in March this year.

“The legal team asks the Supreme Court to re-examine the legal process and evidence, and whether the DNA samples collected from the crime scene really matched those of the defendants,” lawyer Nakhon Chomphuchat told The Nation.

The case has been closely watched internationally and domestically due to the brutal nature of the crime involving foreign tourists, particularly since tourism is a major source of income for the economy.

Witheridge was raped and Miller beaten before both of them were killed. Their bodies were found on a beach on the island.

The death sentences have raised concerns among human right defenders amid claims that the evidence presented by prosecutors had failed to establish the pair’s guilt beyond a reasonable doubt. Critics have also accused the police of failing to properly collect and test DNA samples from the scene. Myanmar authorities and civil society groups have also expressed their concerns over the conduct of Thai police and the way they handled the case.

The two men were arrested weeks after the murder amid severe pressure on the police from the military government and media. Initially, police claimed the two men confessed but the men later retracted their statements, saying they were tortured.

While public prosecutors said DNA evidence collected from cigarette butts, a condom and the bodies of the victims linked Zaw Lin and Win Zaw Htun to the murders, their lawyers argued DNA from a garden hoe allegedly used as the murder weapon did not match samples taken from the men.

The defendants’ legal team has submitted a 319-page document to the Supreme Court for its consideration, a lawyer on the team said.

The Supreme Court’s judgement will be final, although capital punishment sentences have not been carried out in the Kingdom for years.