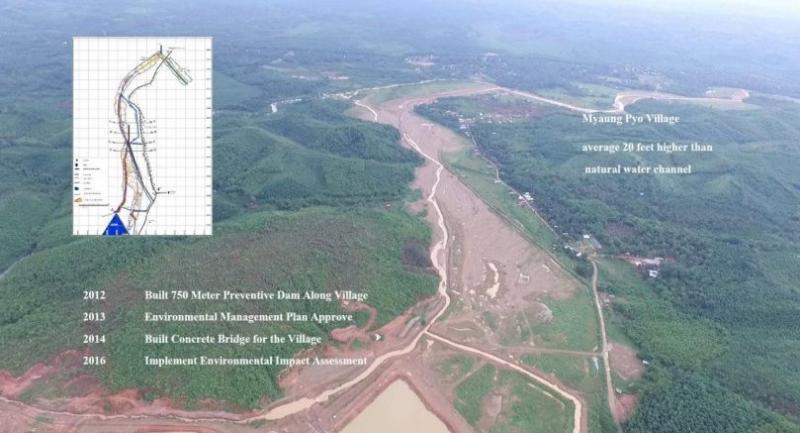 MYANMAR PONGPIPAT has insisted it has fully complied with Myanmar's environment laws.

The firm spoke up in response to the report,which was published in The Nation on March 1, 2017 and uploaded onto www.nationmultimedia.com under the headline Thai mine ‘destroyed Myanmar water sources’.

Myanmar Pongpipat Company Limited has sued Pratch Rujivanarom, who wrote the report, and Nation News Network Company Limited in the criminal case No 967/2560 of the Nakhon Pathom Provincial Court, on grounds that the report has allegedly caused damages to it. The court has arranged mediation session for the plaintiff and the two defendants during which they have agreed to settle the case without proceeding to court trials. During the session, Pratch admitted that he did not contact the plaintiff about the allegation that appeared in the report and Nation News Network agreed to publish the following in its newspaper and website.

Myanmar Pongpipat Company Limited, a Thai-owned firm, insists that it has complied with Myanmar’s standards. The firm’s environmental systems are under the supervision of Myanmar authorities and in line with the standards on the control of industrial raw water. The firm has not harmed the health of people, the environment, communities and pets. The firm has complied with its environmental management plan, which is supervised by Myanmar’s Natural Resources and Environment Ministry. The firm has also been in the process of conducting an environmental impact assessment. In compliance with the aforementioned standards, the firm has conducted water analysis via Kasetsart University, a Thai institute, to check the quality of raw water. The result shows water from sources mentioned in the report is not contaminated.

The firm has distributed environmental knowledge via joint academic projects with the Environmental Research Institute Chulalongkorn University and Myanmar-based educational institutes. State officials and local communities are also given participation so that they can access academic principles and exchanges of knowledge in environment researches under the support of Myanmar’s Natural Resources and Environment Ministry.

Not only that the firm has recognised the importance of sustainable and integrated environmental management, but it has also engaged in social environment in terms of education, public health and religious promotion among neighbouring communities.

To improve the quality of life of the local people, the firm for example has contributed to the constructions of hospitals, schools, religious sites, bridges and roads around mines. Every month, it has also arranged a mobile medical team to treat local people. It has provided free water and electricity to more than 400 families in the mine’s neighbourhood. On education, it has repaired schools, built computer/IT rooms, donated chairs/tables, provided childcare services, and offered scholarships.

Myanmar Pongpipat has received investment-promotion privileges under the project of large tin mine concessions from the Myanmar’s Natural Resources and Environment Ministry, previously known as the Ministry of Mines. The firm has upheld good governance and integration in fulfilling its duty as a good corporate citizen, developing communities, taking care of the environment and developing Myanmar’s tin industries in a sustainable manner.

This was the response to The Nation’s earlier report on the environmental impacts on the local community in Heinda district of Myanmar’s Tanintharyi Region.

Looking out from the local temple, Myaung Pyo seems like a normal rural village. However, just below the thin green line at the back of homes, there is a vast barren area that stretches until the foot of a mountain. This kilometre-wide barren strip was where the Myaung Pyo River once flowed, alongside lush village farms.

The villagers all say the cause of this devastated landscape is the Heinda tin mine on the upper reach of the river. Tailings from the mine have drained directly into the river for many years, clogging it with a large amount of sediment and contaminating the village’s water sources with heavy metals from the mine.

A team from the Thai National Human Rights Commission’s (NHRC) communal rights and resources panel visited the Heinda tin mine last Friday to investigate this environmental tragedy – an alleged violation of local people’s rights by the Thai firm behind the mine.

It found that more than 500 villagers cannot access to clean and safe water because of pollution from the tin mine. The mine is operated by Myanmar Pongpipat Co Ltd.

One villager, Daw Kyin Za, said that since the mine started operating in 1999 the village environment had changed drastically. People lacked a supply of safe water and farms had become degraded.

“We used to have plenty of clean water from the river and from our well. However, since Myanmar Pongpipat took over the mine and started large-scale tin mining, we suffered a series of floods. The river was destroyed by the large amount of sediment from the mine and the village’s water resources were contaminated with heavy metals,” Daw Kyin Za said.

“Right now many people have to depend on small amounts of water piped from the mountain, or have to buy expensive drinking water from outside.”

She said a disaster happened in 2012, when heavy rain caused the mine tailing ponds to overflow and flood the village downstream with mine slag and contaminated water. After that flood, sediment from the mining operation clogged the whole river and caused widespread flooding in the village.

Many wells, including the one in her home, were contaminated with the water from the mine’s tailing ponds and cannot be used anymore.

The water in Kyin Za’s family well turned red from iron oxide and they have not been able to use it in the five years since. If they use it to shower with they get rashes, and if they drink it they get diarrhoea, she said.

As well as the river being filled with sediment from the mine, water from the tailing pond has also been leaking into the local environment until now. Eyi We, another Heinda resident, showed the contaminated stream in her backyard – the water red from the iron it contains.

“We cannot use this water, not even for watering the plants, as it flows directly from the mine,” Eyi We said.

“We used to have a wide and clean river at our backyard that we could use for consumption, washing clothes, or fishing. But now that is history.”

Tanapon Phenrat, a researcher from Naresuan University, who studied heavy metal contamination in the area in 2015, said water from the tailing pond at the Heinda mine was heavily contaminated with manganese, arsenic and lead.

He said that due to the relatively short distance from the mine to the village, people’s drinking water, soil, and plants were seriously affected by heavy metals discharged in the mine water.

“We have found that the source of the village’s drinking water had a very high level of manganese from 53 up to 600 times higher than safe levels,” he said.

Another villager, Zaw Moe Aung, said people had tried to get compensation and improvements to prevent further water leaking out from the mine, but the company had not done this.

“After the big flood in 2012, we sued the company for compensation and mine improvement, but we lost the case in the Appeal Court and they did not give anything to us to remedy our losses, or improve their mining operation to prevent further environmental damage,” Zaw Moe Aung said.

He said people were still protesting on the three requests: clean water and work to help the river recover; a secure future for the community; and an assurance that waste products will not be leaked into the environment again.

“We are not up against the mine. We just want to have our good quality of life and healthy environment back,” he stressed.