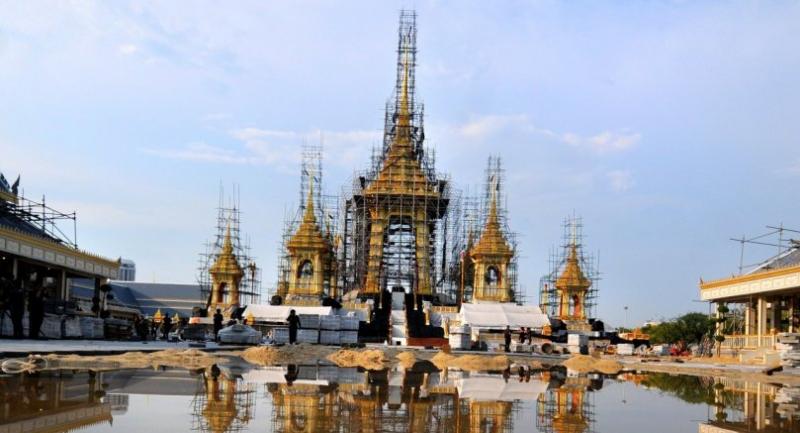 THE grandest-ever Royal crematorium for the late HM King Bhumibol Adulyadej will be finished by September 30 in time for HM King Maha Vajiralongkorn to install the top of the nine-spired funeral pyre on October 18, marking the official end of construction.

The cremation of the late King Rama IX will take place on October 26, the second day of five in the Royal Cremation Ceremonies.
“Now the construction, the interior design and landscape are almost done. It has now reached 90-per-cent completion and we will surely finish the world's greatest crematorium for our beloved King Bhumibol in time,” Deputy Prime Minister General Tanasak Patimapragorn confirmed at a press conference at the National Museum yesterday.

Thai masters are busy finishing the “architecture of heaven” – an elegant nine-spired funeral pyre for the late King that will send his soul into the afterlife in late October.
Built to represent Mount Meru, the centre of the Hindu universe, the Royal Crematorium will embody the highest of Thai arts and architecture, with delicate towers adorned with images from mythology and from the life of the late King, who died on October 13, 2016 in his 89th year, after seven decades on the throne.

Replicas nationwide
Meanwhile, the government also ordered the construction of 85 replicas of the Royal Crematorium around the country, where millions of Thais can pay their last respects to their beloved King Rama IX.
Government Spokesman Lt-General Sansern Kaewkamnerd said the replicas would be installed nationwide by October 15.
There will be one in the Muang district of each of the 76 provinces and another nine in and around Bangkok. The Bangkok sites are the Royal Plaza, the plaza in front of the Bangkok Metropolitan Administration’s headquarters, the former Government Lottery Office, Nagaraphirom Park, King Rama I Plaza, Dhupateme Royal Thai Air Force Sports Stadium, Bangkok International Trade and Exhibition Centre (Bitec), Buddha Monthon Park and King Mongkut’s Institute of Technology Ladkrabang.
After the Royal Cremation Ceremonies, the government will allow the general public to visit an exhibition about the late King from November 1 to 30.
The exhibition will be divided into five zones. The late King’s biography will be presented at the first zone, which will include a high-tech presentation including holograms. His works focusing on sufficiency development will be the highlight of the second zone.
His success developing the land with his Dhamma will be covered in the third zone. His international efforts in bringing Thailand to the world will be presented in the fourth zone. The last zone will feature an exhibition on the royal ceremonies and traditional Thai arts.
The Culture Ministry will produce special exhibits for blind people, along with audio descriptions. The general public will be able to scan QR codes that will show 3D images and text on their personal devices.
The ministry will also distribute 3 million leaflets. About 100,000 people are expected to visit the exhibition each day.
There will be live performances, including Khon masked dance and a live traditional Thai orchestra at the exhibition. Similar performances will also be staged in all provinces.