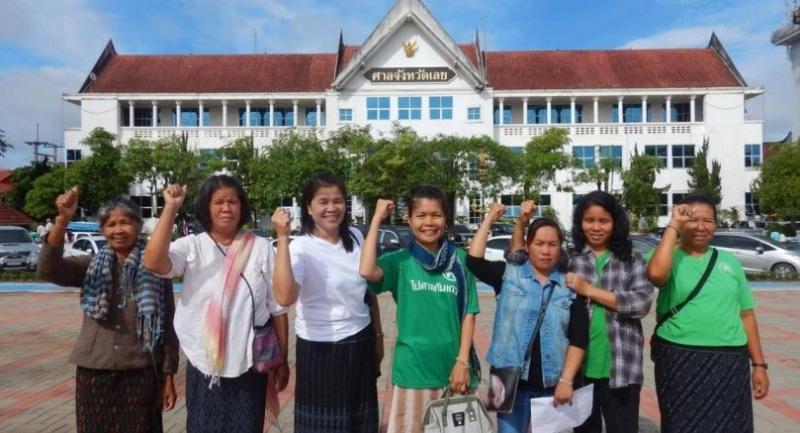 Seven female activists, who have been charged in a public assembly case in relation to the Tungkum gold mine, appear at Loei Provincial Court yesterday to respond to a court summons.

TWO SOLDIERS who led an armed attack on a local community near Tungkum gold mine to open a blockade on a gold transportation route had their sentences extended yesterday.

The lawyer representing local people, Sor Rattanamanee Polkla, said after the court delivered the verdict that Lt-Colonel Poramin Pomnak’s jail term had been extended to four years and 12 months and Lt-General Porapet Pomnak’s sentence had been extended to two years 16 months. The amount of compensation to the plaintiffs of Bt165,600 remained unchanged.

They had previously been sentenced in Criminal Court for harming others, detaining others and unlawfully possessing firearms. The two defendants were found guilty of leading a group of armed men to attack a local community near Tungkum gold mine and open a blocked gold-mine shipping route on September 15, 2014. Three local people were detained by the group and many were beaten.

They were seeking bail permission.

Sor Rattanamanee said the activists had told the court that they did not commit the crime and there will be on further investigation on this case.