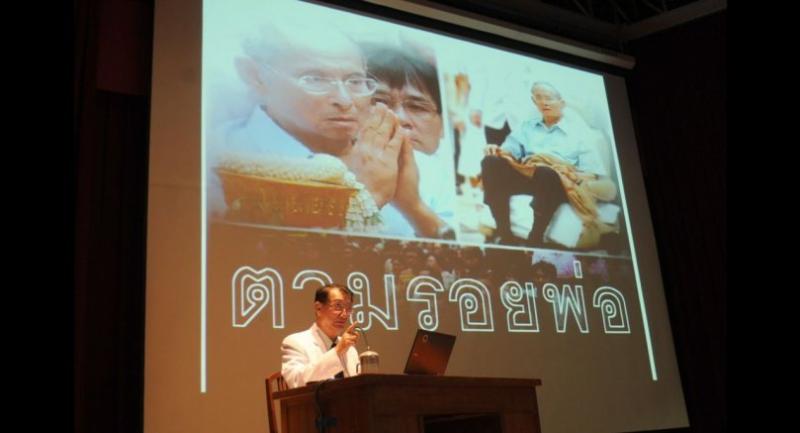 WHILE RECEIVING treatment at Siriraj Hospital, HM King Bhumibol Adulyadej paid caring attention to everyone he encountered, his doctors have said in a tribute to the late monarch.

“When he used an elevator, he touched the shoulder of security guards and said ‘thanks’,” Dr Teerawat Kulthanan, a former dean of the Mahidol University’s Faculty of Medicine Siriraj Hospital, said yesterday. “Sometimes, the King asked if they had had enough sleep too.”

Teerawat shared those stories with people gathered for a special event the faculty organised in remembrance of the beloved King. King Rama IX received treatment at the riverside Siriraj Hospital for years until his passing on October 13 last year.

“Within the Siriraj community, His Majesty once asked if all of us knew how to swim. He often watched the lives of people within the Siriraj compound from the 16th floor of the Chalermphrakiet Building and expressed his concern for everyone,” Teerawat said.

“His Majesty had been working very hard all of the time. Once we consulted him about what we should do given the soaring legal disputes between doctors and patients. His Majesty told us simply ‘be humble, everybody has goodness, do not look down on anyone’. And so I have passed such valuable, noble thoughts to all medical practitioners. What he meant is that when people respect each other, this will help create a relationship of goodwill,” the doctor said.

He said during the course of his treatment, King Rama IX also demonstrated patience and perseverance.

“The physical therapy prescribed to him was difficult. But he did it with great perseverance, despite his old age,” Teerawat said.

He said even at the hospital, King Rama IX worked hard out of his concern for Thai people.

“His Majesty’s kindness can be seen clearly through his compassionate eyes, which always lifted up our spirits and shed our tiredness,” Teerawat said.

The doctor also said Thai people should not hesitate to do good deeds dedicated to the late King.

In retrospect, Teerawat said when he was first appointed as faculty dean, King Rama IX taught him important lessons – “To be like a new student and to be attentive at work with determination”.

Teerawat has since shared that guidance with the faculty. “I always encourage my fellow colleagues and students to humbly learn this by heart.”

Dr Prasit Watanapa, the current dean of the faculty, said King Rama IX’s passing had caused deep grief. “We used to cry every day. But the best way for us is to take good care of his subjects. We should determine to continue his royal resolution and dedication, especially for young people who may not have seen or witnessed what His Majesty tirelessly did for the Thai people. By working for the public, we know His Majesty will always be with us all.” Prasit and Dr Pradit Panchavinnin, head of Siriraj Piyamahakarun Hospital, have been chosen to carry the Phra Kosa Chan Royal Urn during the royal cremation.

“Our hands will represent the hands of all Thais. When you see us on TV supporting the Royal Urn, please know we represent you. Our hands there are like your hands,” he said.