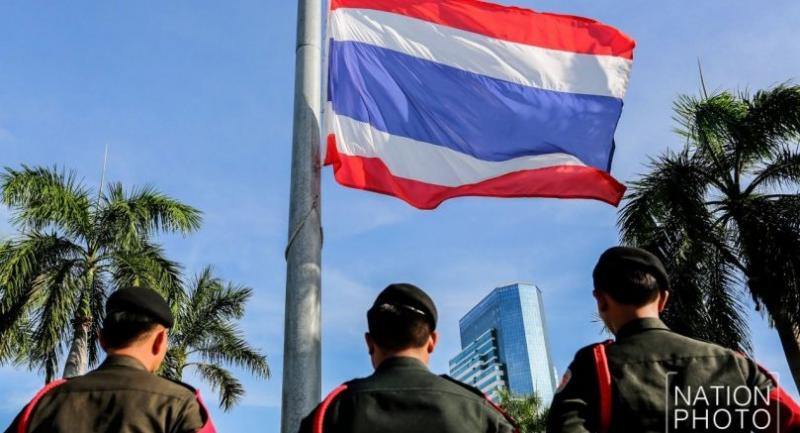 THAILAND HAS been using its current national flag, Thong Trairong, for exactly a century as of today.

To mark the occasion, government and private sector organisations were encouraged to bring staff together to sing the national anthem in front of the flying flag at exactly 8am this morning.

Featuring horizontal stripes in the colours of red, white and blue, Thong Trairong has long been a familiar sight in Thailand. But how many people know Thong Trairong is now 100 years old and its designer was King Rama VI?

“King Rama VI created a new shade of blue for the flag – it’s a mixture of blue and purple,” said Deputy Prime Minister Wissanu Krea-ngam, who is also a historian.

“Blue is widely recognised as the colour of the monarchy, while purple is the colour associated with King Rama VI’s birthday.”

Wissanu said King Rama VI came up with the idea of discontinuing the use of the red flag featuring an elephant as the national symbol for Thailand, or Siam as it was then known, after he returned from a trip to visit flood victims in Uthai Thani province.

“At that time, flags were rare items. People who owned flags would fly them on special occasions only. When local residents heard the king was coming, they brought out the national flags. But out of an error, one such flag was flown with the elephant’s head down,” Wissanu said.

He said King Rama VI noticed that flag but did not issue any reprimand.

“The incident, instead, gave him the idea that he should redesign the national flag.”

On his way back to Bangkok, King Rama VI saw a flag featuring alternate stripes of red and white flying on people’s houses and found it interesting.

“Initially, he endorsed the use of red-white striped flag for Thai merchants’ boats only,” Wissanu said. However, the design later inspired King Rama VI to create the Thong Trairong for Thailand.

National Flag Museum director Pruettipon Prachumpon said he believed red and white were included in Thong Trairong because both colours had appeared on Siam’s national flag for centuries.

It is believed that Siam did not have any national flag until the reign of King Narai the Great in the 17th century. The country took up the tradition after a ship from France stopped at a Bangkok-based fortress to wait for Siamese officials to fly the national flag. Because there was no official national flag, officials resolved to fly a piece of red fabric.

That led to Siam’s first official national flag being red.

The red flag was updated several times under the Chakri Dynasty, with the updated version being used for the king and his fleet. Ordinary people’s boats continued to fly just a red flag.

The drastic change, however, took place in the reign of King Rama VI, with Thong Trairong coming into effect 100 years ago.