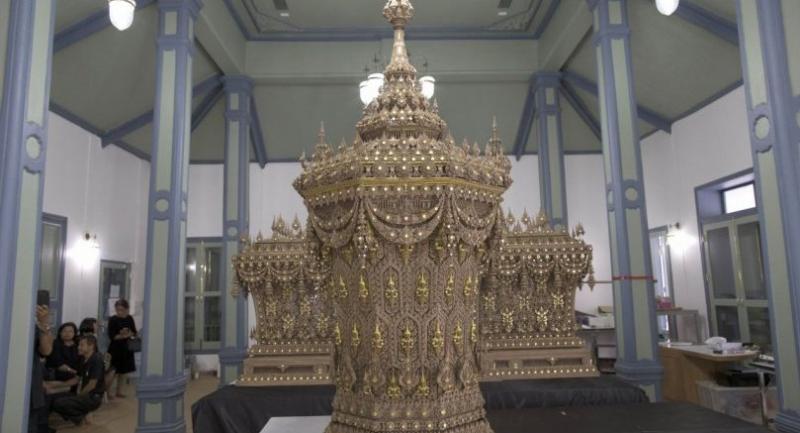 AS CONSTRUCTION preparing the Royal Crematorium for the Royal Cremation of His Majesty Bhumibol Adulyadej at the Sanam Luang ceremonial ground nears completion, huge crowds of mourners have flooded the Grand Palace.

They are there to pay their final respects to the late King at Dusit Maha Prasat Throne Hall, which this week was granted royal permission to open 24 hours daily until October 5.
Visitors appear deeply touched upon viewing the meticulous craftsmanship of the great monarch’s Sandalwood Royal Urn (Phra Kot Chan) and Sandalwood Royal Coffin (Phra Heep Chan).
Designed by artist Somporn Supaluck-ampaiporn of the Fine Art Department, the royal urn and coffin took over eight months of laborious attention to detail to complete. Both are made from fragrant dead-standing sandalwood trees taken from Kui Buri National Park in Prachuap Khiri Khan Province. The frameworks holding the wooden masterpieces are made of iron rods with wire mesh stretched between them.
Pichit Nim-ngarm, a senior artist from the Office of Traditional Arts, says the assembly of so many tiny pieces of hand-carved wood on the framework creates a powerful three-dimensional image that deeply affects visitors.
“According to the Brahman doctrine, a king is an avatar of the three mighty gods – Brahma, Shiva and Vishnu. As the word ‘Ramathibodi’ appears in his full name, King Bhumibol is upheld as avatar of Vishnu or Narayana,” explained Pichit.
“The sandalwood royal coffin hence features a total of over 30,000 pieces of hand-carved wood assembled together to create an exquisite design, featuring 24 patterns of intertwined sprays adorning 132 Garuda, Vishnu’s carrier. The statue of Garuda, decorated with gold leaves, will be placed on the third-layer base of the principal busabok,” he elaborated.
“While the sandalwood royal urn is composed of three interlocking parts – the base, body and the top – assembled from a total of over 10,000 pieces of carved woods featuring 46 traditional Thai flower patterns adorning 64 Theppanom deities. The design of the top part is inspired by the crown of the King featuring three layers of topknot ornaments. Apart from these, both are decorated with craved golden bushes.”
Pichit expressed his appreciation to 20 artists and over 80 volunteers, who devoted their highly skilled craftmanship to help create this once-in-a-lifetime work.
Since the Ayutthaya periods “Phra boroma kot” has referred to royal funeral urns used for kings and queens and ceremoniously encased with the royal remains. The octagonal royal funeral urn comprises two interlocking parts. The outer part, called “long”, is made of a gold-plated wooded frame adorned with gemstones and coloured glass pieces. The decoration varies according to the rank of the deceased.
The inner part is called “kot” and is made of plain gold-plated silver. This royal funeral urn will be carried by the palace bearers from the Grand Palace in the grand traditional procession to the Cremation Ground. The inner part of the Royal Urn will be removed and placed inside the sandalwood royal urn of His Majesty King Bhumibol. Then the sandalwood Royal Urn will be placed atop the sandalwood royal coffin on the “Jitkathan” – the royal funeral pyre constructed in moveable throne form with a square base – at the Principle Pavilion (the main Busabok) of the Royal Crematorium or Phra Merumas.
On the evening of October 26, around 5.30pm, the Buddhist cremation ceremony will take place inside the funeral pyre in the presence of the royal family. Flowers made of sandalwood will be piled around the sandalwood Royal Urn by senior officials and those who have been allowed inside to pay their last respects.
The sandalwood Royal Urn and Coffin will then be removed to the Dismantling Halls within the compound. As the evening falls toward 10pm, people ready themselves for the cremation and the lighting of the fire by His Majesty King Maha Vajiralongkorn.
After the ceremony, the sandalwood Royal Urn and other cremation ceremonial objects will be placed in a museum. The exact location will be announced at a later date.