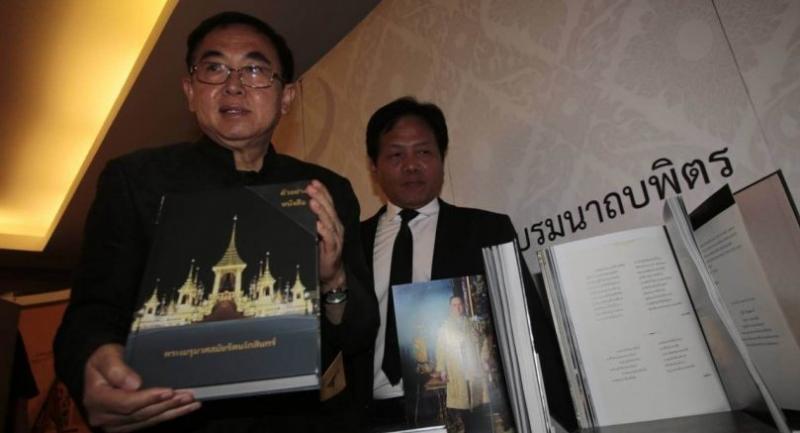 THE CULTURE MINISTRY will release 11 books and other written material to commemorate the late King Bhumibol Adulyadej, with the first of the launches taking place during the upcoming Royal Cremation ceremonies.

“These books show how Thais expressed their love and respect for our beloved King Bhumibol. All texts and images record the historical events since the late King passed away on October 13 last year until his Royal Cremation ceremonies,” Culture Minister Vira Rojpojchanarat said at a press conference on Tuesday at the National Museum.

First off, led by the National Archive, the ministry will distribute throughout the Kingdom more than 10 million leaflets in Thai on King Rama IX’s biography, his works and the royal funeral ceremonies on the day of the Royal Cremation, October 26.

A further 100,000 leaflets in English will be distributed to diplomatic and foreign guests at the Royal Cremation, as well to Thai embassies abroad.

The National Archive has produced an official chronicle for the period since the late monarch’s passing.

Covering the whole year, the four-volume book will feature more than 200 events and comprise over 500,000 stories and images.

It is expected to launch next May, while a video version of the royal chronicle will be launched via the ministry website, www.culture.or.th

There is also a chronicle of events as recorded by the general public. The three-volume book features a record of events over the past year in Bangkok, in the provinces and abroad.

News coverage on King Bhumibol’s passing and Thai traditions for the Royal Cremation, comprising reporting both in Thailand and abroad, will be also published in a two-volume book.

“Our thanks to all media for recording this historical and world event. It’s part of our history,” Vira said.

Another two-volume book will focus on a poetic commemoration of the late King’s life and works.

“Nine leading poets, including national artist Naowarat Pongpaiboon, have been invited to compose poems based on the late King’s speeches and his teachings,” said Ornsara Saibua, director of literature and history at the National Archive.

Since the King passed away last October, thousands of Thais have expressed their sadness through poetic messages online.

Ornsara’s team has selected 189 such messages out of a total of more than 100,000 for publication in the second poetic remembrance volume.

Images of banners throughout the Kingdom and abroad expressing people’s gratitude to the late King will be also published.

To commemorate King Bhumibol as a great musician and supreme artist, leading composers have written many new songs, and the National Archive will publish books including 570 songs in total, along with a CD.

A much-anticipated two-volume book will feature the historical Merumas in Ratanakosin and the Meru during the reign of King Rama IX.

Another book will focus on the royal funeral cremation ceremonies.

The various books are expected to be distributed to national libraries throughout the country and to Thai embassies around the globe from this month through to the middle of next year.

All books and videos will also be accessible online via the Culture Ministry website.