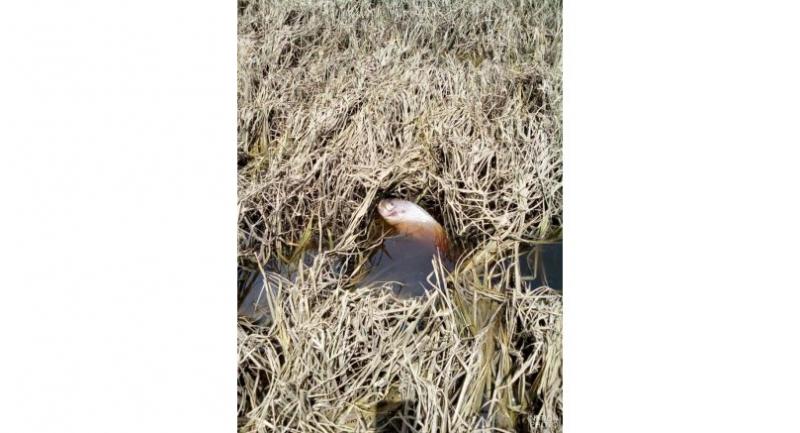 Dead fish can be seen everywhere in a flooded paddy field in Suphan Buri.

VICTIMS OF a waste water flood from an ethanol factory in Suphan Buri are suffering health issues and destroyed crops, 10 days after their paddy fields were swamped.

Hundreds of farmers in Suphan Buri’s Dan Chang district yesterday complained that their rice crop had started to die off and they had not been offered assistance from the owners of Thai Agro Energy Company or local authorities.

More than 590 families from 35 villages in Suphan Buri are suffering environmental and health impacts from the flood since the wastewater reservoirs overflowed at the plant on October 1.

They said many low-lying areas, including paddy fields, were still flooded with wastewater, which had killed aquatic animals, destroyed crops and harmed people’s health.

Phikul Phochai, from Tambon Nhong Makamhong, said that all of her six-rai (0.96-hectare) paddy field was flooded with wastewater, which had killed the rice crop that would have been ready to harvest in the next few months.

“I invested a lot in this crop and expected that our family could earn to Bt60,000. But it failed because of the wastewater flood from the ethanol factory,” Phikul said.

“We are very sad. Not only have we lost the main income from rice, I also cannot get a job working in the paddy field because all of the paddy fields around here were destroyed as well. There is no help from outside, after we received a Bt10,000 remedy from the factory.”

She said the Bt10,000 the factory had given to affected people was not enough to pay for the damages caused by the incident. Many people, including her family, have started to have financial problems as they have not had incomes since the flood.

“Many people also got sick from the smell of wastewater and got a rash after walking in the floodwater. We need help now,” she said.

Some local people have started to talk about filing a lawsuit against the company, but they wanted to hear the company’s offer of help first, she said.

Suphan Buri deputy governor Pipop Bulthum said authorities had already discussed the problem with the company, which said it would pay full compensation to every affected family.

Pipop said a team of officers from relevant agencies would be dispatched to the area today to chart the damage as evidence in determining compensation from the company.

“We would like to assure that all affected people will get proper compensation, or else they can exercise their rights to sue the company in court,” he said.

Somchai Ameen, a lawyer who has been involved in environmental cases, said local people could file a lawsuit against the company immediately, as it was obvious that the ethanol factory caused an environmental impact to people and the ecosystem.

“People can gather together and sue the company as a group. This is a clear violation of the Enhancement and Conservation of National Environmental Quality Act and a violation of people’s rights to a healthy environment,” Somchai said.