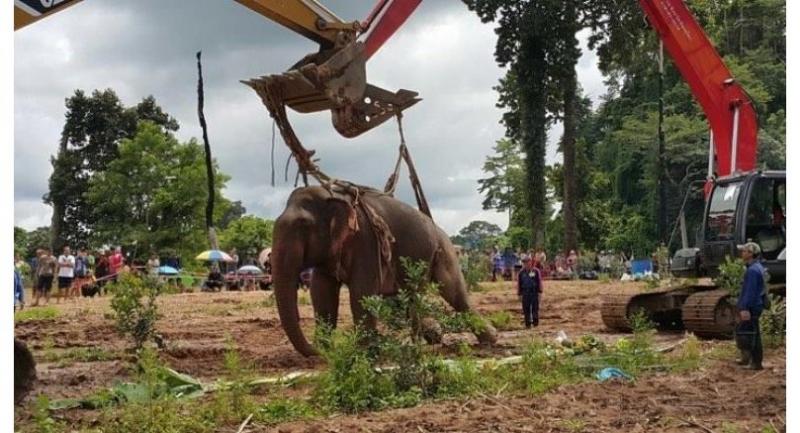 A male elephant that was rescued from a muddy canal in Phitsanulok province has only a 50/50 chance of survival because both of its hind legs appear to have broken bones and were not usable, said a veterinarian.

Dr Taweechoke Angkawani of the Thai Elephant Conservation Centre said his team would do their best to help the animal.

The elephant was rescued on Wednesday after being stuck for about 26 hours in a muddy canal close to a national park in Nuenmaprang district, close to Thungsalangluang National Park.

However, the animal appeared to be exhausted and just lay on the ground after having stood in the strong canal current for so long.

The team of vets used two big bulldozers to lift the beast onto a truck to take him to the Thai Elephant Conservation Centre for treatment.

During the attempt, the vets noticed that the elephant’s hind legs seemed to suffer from broken bones or nerve dysfunction.

Taweechoke said that if it is the case, this elephant has slim chance of survival, perhaps up to 50 per cent, as it is already 15 years old.

“If it were younger or about 10 years old, it would have more chance to survive,” the doctor said.

He spoke as the elephant was moved to a truck about 300 metres from where it lay on the ground.

The move was being performed at low speed – expected to take some three to four hours – because of the condition of the soil and the weight of the animal, said Taweechoke.