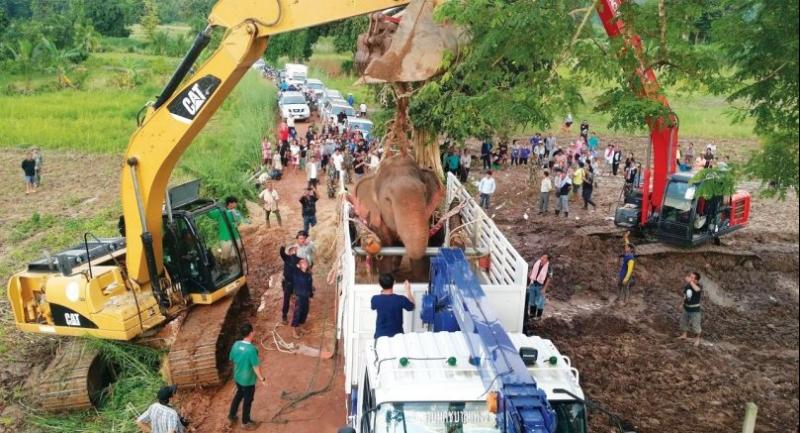 A 15-year-old male elephant rescued from a muddy canal in Phitsanulok province yesterday was lifted using two big backhoes, placed in a truck and taken to an |elephant hospital in Lampang province.

ชA veterinarian said the elephant had a 50-50 chance of survival due to its broken legs.

Teams of rescuers, villagers and civilians spent almost six hours moving the animal 300-metres from the bank of the Chompu canal into the truck. They were handicapped by the wet soil and the weight of the elephant as it could not stand by itself.

The elephant, now named “Tara” or water, was spotted in the canal close to Thungsalangluang National Park, on Wednesday. Attempts to rescue Tara failed on Wednesday due to strong currents and its reluctance to be assisted.

Rescue teams spent about 26 hours before being able to pull it out of the canal yesterday. Tara is believed to be from the national park and got separated from his mother during the flash flood that swept him down the canal.

Dr Taweechoke Angkawani of the Thai Elephant Conservation Centre in Lampang said that Tara has only a 50-50 chance of survival because both his hind legs appear to have broken bones and were not usable.

“If the elephant cannot stand on its feet, the chance of survival is very slim. I think the chance is 50-50 as it appears to be about 15 years old. If it were younger, say about 10 years old, it would have a better chance,” he said. However, he said his team would do its best to help the animal.

After being pulled out of the river, Tara appeared exhausted and just lay on the ground, having withstood the strong water current in the canal for a long period. The veterinary team gave him bottles of saline water and drugs to give him energy.

Taweechoke said the team would attempt to cure the elephant’s symptoms and monitor its condition.