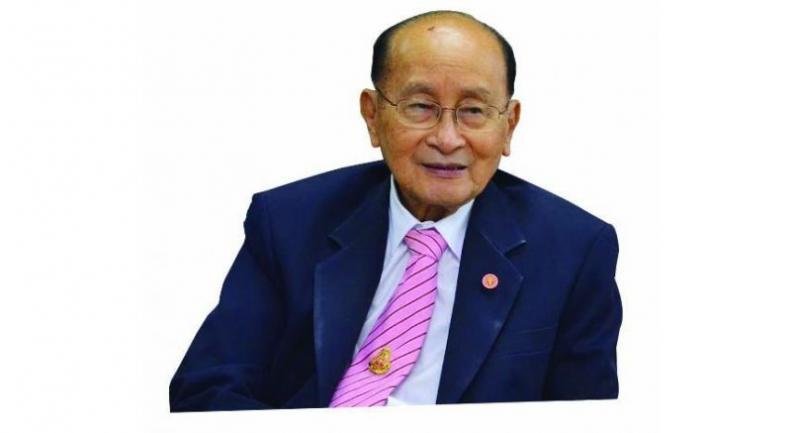 UNDER ITS new leadership, Sasin – one of Thailand’s most prestigious graduate schools – plans not to “compete” but to “differentiate”.

“Differentiation will be at the heart of Sasin’s re-branding,” Paron Israsena Na Ayudhya said during an exclusive interview with The Nation last week. He took the helm of the Sasin Graduate Institute of Business Administration of Chulalongkorn University in June.

At the age of 90, Paron is confident that he is still up to the job as his mind is sharp, his experience is rich and his connections are extensive. “I am going to lead Sasin to a new era,” he said.

Paron is the current board chairman at Thaicom Public Co and a former CEO of Siam Cement Group (SCG). Before joining SCG, he sat on several boards of directors, including that of Sasin’s parent organisation, Chulalongkorn University. He can also be considered a co-founder of Sasin.

Established in 1982, Sasin sprang into operation as a collaborative effort by Chulalongkorn University, the Kellogg School of Management of Northwestern University and the Wharton School of the University of Pennsylvania.

It is the first institution in Thailand to have earned both AACSB (Association to Advance Collegiate Schools of Business) and EQUIS (European Quality Improvement System) accreditation. These qualifications recognise Sasin’s leading role among business schools in Thailand and Asia.

In Paron’s eyes, Sasin used to be the leading graduate school in Southeast Asia. But lately its prominence has shined less brightly as Singaporean and Hong Kong authorities have injected huge amounts of money into the development of their graduate institutes.

“Now, we hope to highlight Sasin as the life-long learning leader in the digital world,” Paron said. “I am trying to establish contacts with Silicon Valley. I am trying to forge collaboration with new-world experts. We hope that they will teach our students.”

Paron has many foreign contacts. Sasin has already successfully networked with the Massachusetts of Technology (MIT), Stanford University and various Japanese institutes.

“Many foreign experts are willing to serve as guest speakers,” he said.

He now plans to ask the Thai government to consider offering tax incentives to Thai firms that expand overseas – and pay for some of their overseas staff to study at Sasin.

“I think this will be a win-win situation,” Paron said. He added that he would invite Sasin alumni to brainstorming sessions and develop fruitful networks with these alumni.

“Many of our alumni now hold key positions at big firms. It will be good if they connect with us to exchange viewpoints and recommend funding sources for research,” Paron said.

With Paron at its helm, Sasin will also focus on “action learning”. “We pursue the theme of ‘teach less and learn more’,” he said.

For example, Sasin students and lecturers have joined MIT students in projects to solve problems at three firms.

“We have decided to expose our students to the real work environment. Case studies are not enough any more,” he said. Paron said his old age would not pose any obstacle to his job to make Sasin shine.

“I am an ultimate life-long learner. I work actively seven days a week too,” he said.